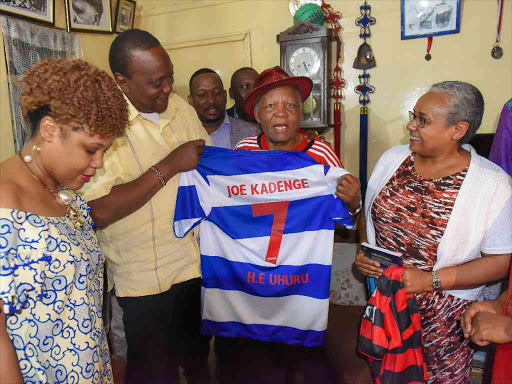 President Uhuru Kenyatta and First Lady Margaret Kenyatta receives Jerseys from football legend Joe Kadenge when they visited him at his residence in South B, Nairobi Photo/PSCU

President Uhuru Kenyatta on Sunday honored ailing football legend Joe Kadenge’s dying wishes by paying him a visit at his South B home in Nairobi.

The President donated Sh2 million to aid in offsetting Kadenge’s hospital bill and offered him a full medical cover.

Kadenge who in his prime was Kenya's finest footballer made a wish to see the President last year, when he was admitted in hospital.

He is suffering from diabetes.

In his career, Kadenge played for Maragoli United, and scored the fastest ever goal in the Kenyan Premier League.

Kadenge managed the Kenya national football team in 2002. He suffered a stroke in January 2006.