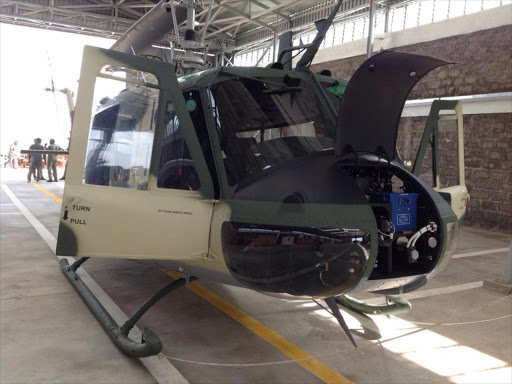 One of the six Bell Huey helicopters that the Kenya Defence Forces received from the US, December 2, 2016. /COURTESY

The Kenyan military has received

The versatile war-tested choppers have the capacity to operate in hot conditions and at high altitude.

They will assist troops who are part of the African Union Mission in Somalia, that has been conducting operations against terror group al Shabaab.

The helicopters will be used

in evacuation and/or deployment of troops, delivery of supplies and air assaults, amid efforts to secure Kenya and the region.

The other two will be delivered to the Kenya Defence Forces in May 2017.

US ambassador Robert Godec said Kenya has made good progress in strengthening security and that his country will continue giving support.

"The US welcomes the efforts Kenya is making. We are going to stand shoulder to shoulder with you in this war," said Godec.

He noted that the delivery was a follow up to a cooperation memorandum the two countries entered in 2010.

Among the equipment the Chinese government handed over were water and fuel bowzers; fire-fighting units with engines and protective regalia; a refrigerated truck and excavators.