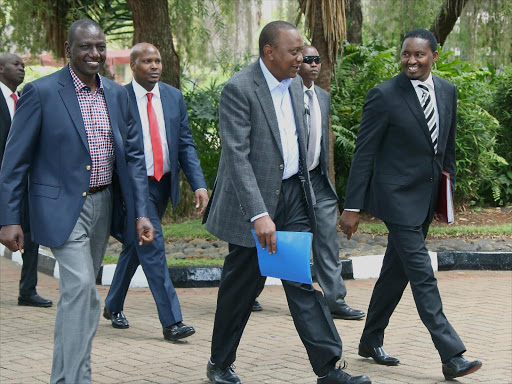 President Uhuru Kenyatta will be hosting the Cabinet and senior government officials at the Sagana state lodge for a three-day retreat from Friday this week.

Sources told the Star that the President will

During his stay at the lodge, President Uhuru is also expected to visit some counties including Kirinyaga, Embu and Laikipia.

The retreat will be the third since Uhuru came to power, the first one in March 2014 at Mt Kenya Safari Club and the second at the Great Rift Valley Lodge in Naivasha in April 2016 all meant to review his time in office.

The President who will leave Nairobi on Friday afternoon is said to like spending his working holidays at the state lodge. In 2015 he stayed at the lodge in Nyeri county for several days meeting the cabinet and security chiefs.

his Somalia counterpart Hassan Sheikh Mohamud for a two-day retreat on stabilising the troubled Horn of African country.

Uhuru’s out-of-town business excursion however rekindles memories of his father’s Presidency as Jomo Kenyatta could be out of Nairobi for months, either working from Mombasa or Nakuru.