State to spend Sh5.4 billlion to counter drought until 2017 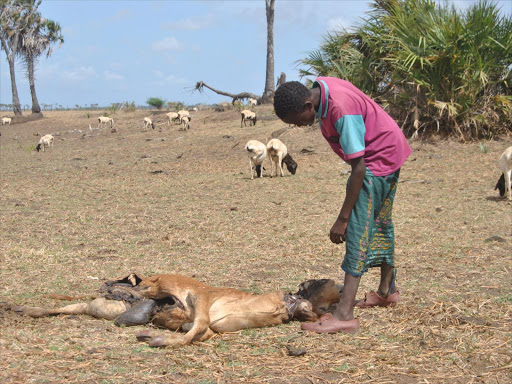 Some of the carcasses of cattle that died as a result of the drought calamity at Odole in Tanadelta on Thursday October 27.Photo Alphonce Gari

The government has set aside Sh5.4 billion to feed 2.9 million starving Kenyans in 19 drought stricken counties.

Spokesman Eric Kiraithe said the funds will be used to mitigate effects of drought that is projected to extend up to August 2017.

Kiraithe said the government has encountered challenges is some areas where the citizens in need are not reachable .

"The government has been closely monitoring the situation and is working with stakeholders to coordinate effective short and long term interventions," Kiraithe said.

"With the late start of short rains, all indications are that the drought will persist into 2017," he said.

Kiraithe said the situation has left herders without feeds for their livestock leading to diseases and death caused by starvation.

The state has classified Kilifi, Garissa, Kwale, Lamu and Marsabit counties as areas in need of emergency response owing to the drought.

Kiraithe said Sh1.65 billion has been allocated to food relief adding that the rations of food stuffs will be doubled from this month.

Some Sh713 million has been allocated towards ensuring the supplementary and therapeutic feeding for children under five.

The same will be spent towards provision of water treatment services and other measures to support the health of starving citizens.

Ministry of Water will spend Sh1.24 billion for drilling, preparation and rehabilitation of boreholes, purchase and distribution of plastic collapsible tanks.

The ministry is also set to use the cash for purchase of water distribution and storage equipment.

The agriculture ministry will receive Sh244 million for the purchase of drought tolerant seeds and the repositioning of strategic food reserve stocks.

"They will receive a further Sh1.3 billion for interventions including livestock offtake, purchase of hay and concentrates and disease management," Kiraithe said.

He said Sh115 million has been allocated to boost security in various counties and Sh156 million will be distributed as fees subsidy to day secondary schools to enable children remain in class as the hunger bites.

Kiraithe warned government officials against selling the food meant for victims of drought.

"The government is also aware that in some areas, resources meant for relief are ending up in the wrong hands. We take this opportunity to inform the public that this relief is for families in need and any other person found benefiting

will be prosecuted as a thief," he said.

"Country security committees, county governments and other stakeholders have been tasked with the responsibility of ensuring this impropriety does not occur," Kiraithe said.

Post a comment
WATCH: The latest videos from the Star
by JOSEPH NDUNDA, @MuthuiNdunda
News
18 November 2016 - 09:00
Read The E-Paper