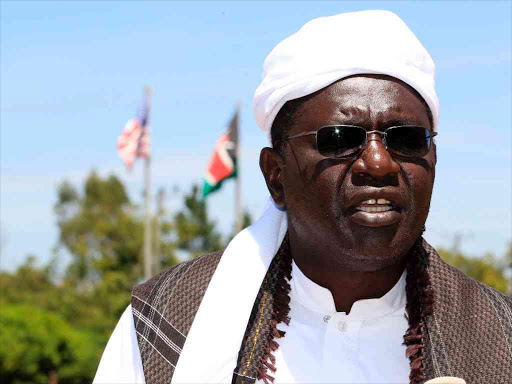 Malik Obama, half-brother of US President Barack Obama, speaks during an interview with Reuters on Obama's re-election as President, in his ancestral home village of Nyangoma Kogelo, November 7, 2012. /REUTERS

Outgoing US president Barack Obama's half-brother went on a Twitter rant against him on Wednesday after Republican Candidate Donald Trump won the presidential election.

Malik said in July that he was unhappy with Obama's leadership and would vote for Trump in the poll that took place on November 8.

"He appeals to me and I think he is down to earth and he speaks from the heart and he is not trying to be politically correct. He's just straight-forward," he said of Trump.

The man took to the social media platform to congratulate the Republican presidential nominee and mock Democratic candidate Hillary Clinton.

"Crooked Hillary has called President Trump to conceded," read one of his tweets, while another said: "Rigged system but the people have spoken! They don't want to call it!"

Malik's rants began a day before the election when he wrote that CNN, criticised for bias in covering the election, was the "Clinton News Network".

He described MSNBC as "Mainstream Netwrok Broadcasting for Clinton".

He termed media houses that delved into the "Trump phenom" as crooked and the two news networks as hypocritical.

"They nailed him to the cross, hung him up to dry, and pounded him to the ground but Mr.Trump showed them he's tough as nails! Wow!" he wrote about his choice candidate.

He said in another tweet: "Mr Trump is Malcolm X re-incarnated; the white Malcolm X," and asked people to listen to him so as to understand.

Malcolm X was a famous African American leader who was the in the 1950s and 60s.

Malik, a US citizen, has lived in Washington since 1985 where he worked with various firms before becoming an independent financial consultant.

Trump's stance against Muslims coming in to the United States was understandable even to Muslims like himself, he said in July.

"I'm a Muslim, of course, but you can't have people going around just shooting people and killing people just in the name of Islam," he said.

He criticised President Obama's record in the White House saying he had not done much for the American people and his extended family despite the high expectations that accompanied his election in 2008, both in the United States and Kenya.

On Twitter today, Malik wrote: My two children died while my brother was President; not even simple condolence. Humiliated and demeaned. God Bless!"