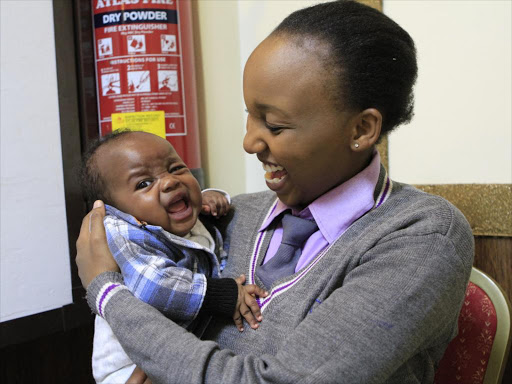 Mary Muthoni, an 18-year-old form four student at Akiba School in Kangemi, with her twomonth- old baby yesterday. Muthoni will sit her KCSE exam from next week, as she balances studies and parenthood /MONICAH MWANGI

About one in every five teenage girls between 15-19 years have either had a live birth or are pregnant with their first child, according to a report by the United Nations Population Fund.

Narok county has the highest number of teenage pregnancies at 40.4 per cent, higher than the national average of 18 per cent.

“Fertility rate for girls aged 15-19 in Narok is 225 births per 1,000 girls, more than two times higher than the national level, which is 96 and the highest in the country,” says the report. It noted an unmet contraceptive need among married adolescents in Narok.

“Only 12 per cent of married girls between 15-19 use contraceptives, which is three times lower than the national level,” the report said.

UNFPA released the report on the state of world population yesterday.

“We need to exploit the talents of our children and especially girls by stopping early pregnancies and marriages,” Planning and Statistics PS Saitoti Torome said.

with 18 per cent of the girls getting pregnant before 18 years.

“This implies many girls continue to drop out of school and experience health related challenges, including mortality and morbidity due to birth related complications and unsafe abortion. The girls are in some instances forced into early marriages,” National Council for Population and Development director general Josephine Kibaru said.

The country needs to do more to cut school dropuot rate as a result of early pregnancy.

Post a comment
WATCH: The latest videos from the Star
by Monicah Mwangi @monicahmwangi
News
02 November 2016 - 03:00
Read The E-Paper