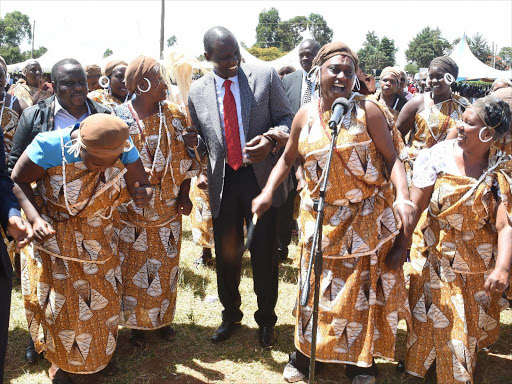 DEPUTY President William Ruto has defended President Kenyatta’s sister Nyokabi Muthama, who has been linked to the Sh5 billion scandal at the Ministry of Health, saying she should not be targeted for being a member of the First Family.

Ruto said Uhuru’s sister, cousin or any other relative has the right to engage in business.

“They are talking of Uhuru’s sister, is she not a woman like others?

Uhuru cannot have a sister who is a man. She must be respected as a woman on her own, instead of being targeted just because she is the President’s sister,” the DP said.

He said all women and youth had been given the right to do business and it was wrong for the Opposition and the media to target Uhuru’s kin.

Firms in which Uhuru’s sister Nyokabi and cousin Kathleen Kihanya are directors are some of those that benefited from Afya House millions. Ruto spoke at St Joseph’s Kabyemit Catholic Church in Eldoret yesterday.

“We should not target people because they are sister or brother to so and so and, or they come from this or that family”, said the DP.

He said the Opposition and the media should fight graft using facts, instead of propaganda and false reports. The draft audit report which exposed the scandals at Afya House had to be investigated further and should not be used to target anyone.

Ruto said firm action will be taken against public servants and private individuals alleged to be involved in the loss of more than Sh5 billion at the Ministry of Health.

Ruto says the audit report that revealed the scandal was initiated by the government, but further investigations were being carried out on the scandal.

He said all Kenyans had the right to do business anywhere in the country, so long as they follow the law.

Ruto claimed the Opposition was so envious of the success of the Jubilee administrations it is now harping on scandals to discredit the government.

He said the current alleged Sh5.3 billion Health scam is another agenda brought forth by the Opposition in a bid to tarnish the government.

“They started with the SGR, the Laptop project, the modernization of the roads, Health equipment for hospitals, the Eurobond and now they are claiming that Sh5 billion has been stolen from the Health ministry, but all this is not true”, said Ruto.

Ruto said the Opposition was using the alleged scandals to divert attention from their own problems, including the failure to pick a presidential candidate who will face off with Jubilee next year.

He said all the Opposition knows well is to organise demonstrations that are of no benefit to Kenyans.

Kuria also told off the Opposition for targeting Uhuru’s family in the scandal.

He maintained that every Kenyan has a right to apply for government tenders, irrespective of the close relations they have with those in government.

“It shouldn’t be a big deal just because it’s about Uhuru’s family. When Raila Odinga was in power he ensured that all his relatives were appointed to positions”, claimed Kuria.

Barua urged Kenyans to reject the Opposition next year and reelect Jubilee.