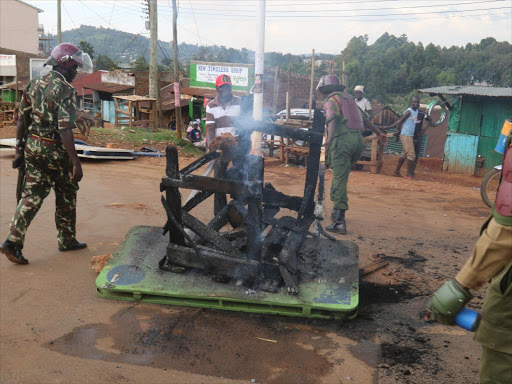 Ten students from Kisii University were on

The students were protesting the introduction of new fee payment rules by the administration.

They want the university to withdraw the date set for them to clear fees before sitting exams.

In the new rules, the university management requires all students who had not cleared fees by October 15, 2015

to defer their classes until next semester.

“This draconian rule was introduced without prior consultations,” said a student who asked not to be named.

They said the university had failed to listen to them and accused the administration of being high handed.

The students allegedly used a petrol bomb to burn the office and also lit bonfires along the busy Kisii-Kilgoris road, disrupting traffic for several hours.

It is said they also attempted to torch a petrol station at Mwembe area but the fire was put out by Kisii County Fire Brigade.

Anti-riot police moved swiftly and quelled the riots. Some students were injured as police engaged them in running battles.

The University Vice Chancellor Prof John Akama was said to be in a management meeting for the better part of the day.

But sources said the new rule was introduced because students owe the institution millions of shillings in fees arrears.