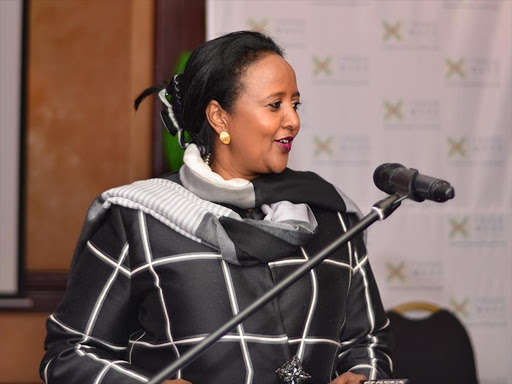 Foreign Affairs CS Amina Mohamed’s candidature for the position of the African Union Commission Chair has been received positively by African leaders.

President Uhuru Kenyatta separately held bilateral talks with eight Heads of State and government to drum up support for Amina.

Uhuru met the leaders on the margins of the African Union Extraordinary Summit on Maritime Security and Safety and Development in Africa in Lome, Togo.

andIdriss Déby (Chad) who is also the Chairman of AU.

In an interview in Lome, CS Amina said Kenya was considered a good member of the African community of nations and was why “there was a lot of receptiveness to our candidature”.

But she pointed out that the AU Commission Chair was an elective position and required energy and commitment to win it.

“And that is why it was important for the President to have discussions with the leaders on the candidature even though he had sent out letters to them,” the CS said.

"The leaders discussed not only her candidature but also other issues of importance Kenya and their respective countries."

Amina said she was vying for the position because it was time for Kenya to provide a candidate that will unite the continent.

“My credentials, especially in building consensus and carrying out reforms, are critical in bringing everybody together,” Amina said.

Amina’s credentials include being

the first woman to lead the Ministry of Foreign Affairs in Kenya.

is the first woman to have chaired the three most important bodies of the World Trade Organization; the Trade Policy Body, the Dispute Settlement Body and the Governing General Council of the WTO.

She has served as President of the Conference on Disarmament, and the first African and the first female Chairperson of the Council of the International Organisation for Migration.

Amina was elected President of the U.N. International Conference on Transnational Crime in Vienna, Austria for a two-year period.