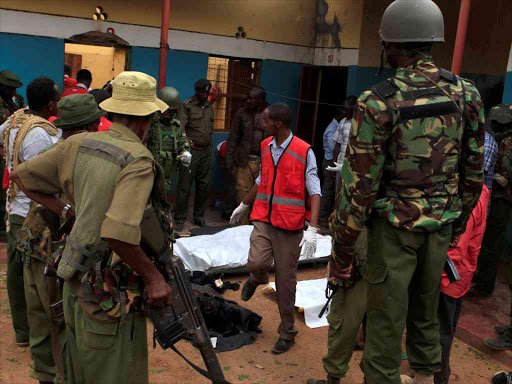 Police officers stand by dead bodies after an attack by Islamist militants from the Somali group al Shabaab in Mandera, Kenya, October 6, 2016. /REUTERS

on Thursday, a resident has said.

The teacher who lives near the attacked residential plot

and smashed by grenades," he told the Star.

"I do not know how to say it better. I am psychologically bullied."

The terrorists raided the plot with about 33 non-locals at about 2am, as they slept.

confirmed it carried out the attack near the border with Somalia.

"We are behind the Mandera attack in which we killed six Christians," military operations spokesman Sheikh Abdiasis Musab

He added they also hit a police vehicle using a roadside bomb.

"We have suffered another sad attack," Roba wrote, adding six people had been confirmed killed.

"If not for the quick response by our security forces we would be talking of many more casualties," he said.

"From the nature and style of the attack, it would obviously be al Shabaab."

Post a comment
WATCH: The latest videos from the Star
by NANCY AGUTU @NancyAgutu
News
06 October 2016 - 09:00
Read The E-Paper