State revs up plans to set up regional cancer centres 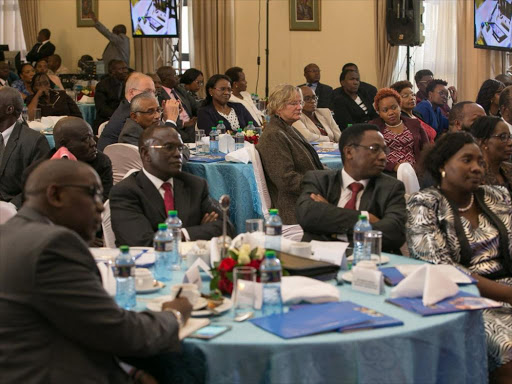 Stakeholders in the health care sector during the summit at State House, Nairobi on Tuesday, September 13. /PSCU

This is one of the new strategies the state is taking up in the fight against the killer disease.

Dr Mailu, who spoke on Wednesday during the State House Summit on Health, said the government is also equipping and improving infrastructure in public facilities at the county.

Those at the national level will also be improved to increase access to health in efforts to deliver the Jubilee administration’s promise on health.

"Cancer diagnosis and treatment can be managed as outpatient ailments with the right equipment in hospitals. Distance, however, force patients to be admitted at the referral hospitals," Mailu told sector players during the Summit.

The CS outlined the various programmes put in place by the government to improve health care in the country.

He said Sh98.3 billion has been invested in specialised equipment in hospitals and free health care services, including free maternity services.

The CS added that the Government has also allocated Sh20 billion to HIV, TB and Malaria programs among others.

"HIV, TB and malaria programs Sh20 billion, Sh28 billion for expansion of NHIF benefit care package to include chronic illness while Sh26 billion is for upgrading healthcare in informal settlements," the CS said.

The CS observed that interventions and achievements in maternal health have doubled skilled deliveries from 600,000 to 1.2 million, enabling 58 per cent of Kenyan women to access contraception.

Interventions and achievements in child health,

Mailu said, include reduction of diarrhea in children by 50 per cent, improved nutritional status and immunization coverage; and reduction in transmission of HIV from mother to child by 50 per cent (13,000 to 6,500).

He pointed out that government distributed 12.6 million mosquito nets to ensure that majority of children in the country sleep under a net while 90 per cent of TB patients get treatment.