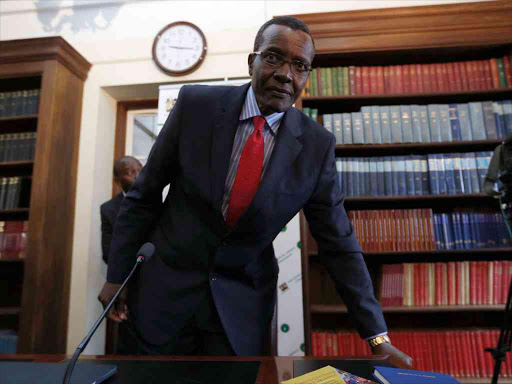 Justice David Maraga takes his seat for his interview for the position of Chief Justice before the Judicial Service Commission at the Supreme Court, August 31, 2016. /FILE

Sexuality returned to the fore yet again as the Judicial Service Commission yesterday interviewed candidates for the Chief Justice position.

Candidate David Maraga said the law should accommodate intersex people. “Gays and lesbians have chosen a way of life, which is condemned by many religions. Marriage is between a man and a woman,” he said.

Maraga seemed sympathetic to intersex people, saying they never chose to be born the way they are and they need to be protected and provided for. “Intersex did not choose to be what they are. As long as what they are urging is not against the public, the law and does not infringe on anyone’s rights, they should be accommodated. Anyone can get an intersex child and you have to provide for them and protect them,” he said.

Maraga was tasked to explain how he would deal with an intricate child custody case in which a surrogate mother and a biological one demand the child’s custody.

He said even though it is a grey area in law, he would put the child’s interests first and consider the agreement between the two parents and the surrogate mother under normal contract law. Maraga, however, believes the emerging issue of assisted suicide should not be handled by courts.

He categorically told the JSC he would not work on a Saturday because he is a Seventh-Day Adventist and his religion forbids work on the Sabbath.

Maraga said if need arose for him to work on Saturday, he would implore his colleagues to accommodate him and come up with a way of getting the work done, even if it meant working late or putting in extra hours.