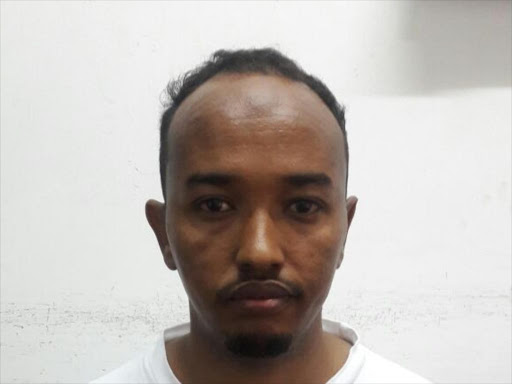 Abdulrazak Abdulnuur was arrested by anti-terror police in Malindi after allegedly trying to join an ISIS cell in Somalia, August 29, 2016 /COURTESY

Mohamed Shukri and Abdulrazak Abdinuur were arrested on Sunday* in a joint operation by Mombasa and Nairobi anti-terror police in Malindi.

The two are attached to Malindi subcounty hospital.

Initial investigations have revealed that Shukri is part of the earlier ISIS recruitment network that was discovered by police and who had been working on plans of using Anthrax to launch terrorist attacks.

Shukri and Abdinuur have been evading police and were allegedly intending to relocate to Puntland in Somalia to join an ISIS cell in Somalia that is under Sheikh Muumin.

The two were planning to acquire fake travel documents to facilitate their escape to Somalia.

Mohamed Shukri was arrested by anti-terror police in Malindi after allegedly trying to join an ISIS cell in Somalia, August 29, 2016 /COURTESY

Intelligence reports indicate that they are among Biochemistry students allegedly lured to join the terror organisation while undergoing training in Russia.

The suspects are from Mandera and had benefited from a government scholarship program to study medicine in Saratov University in Russia.

They were living together at the time of their arrest

Police intercepted communication indicating that they were travelling to join the Islamic State.

They are linked to another medical intern, Mohammed Abdi Ali, who was arrested in May in connection with planning a biological attack.

Police said Ali has a wide network in local and international regions.

A senior ATPU officer who declined to be named said the two students are part of wide networks of medical students targeted by ISIS after being promised better jobs.

They have been flown to Nairobi for further investigations.

*An earlier version of this story stated Monday as the day of arrest. The story has been updated.