Riek Machar spotted in Dodoma as Raila rush to Tanzania 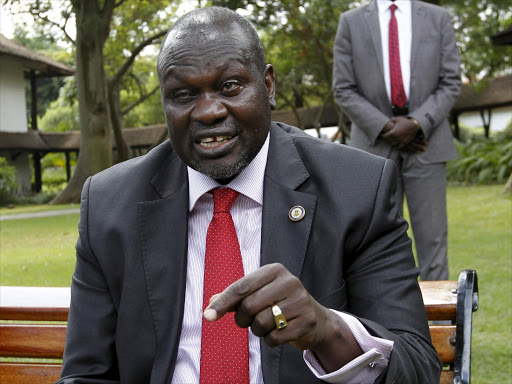 Sacked South Sudan Vice President Riek Machar has been spotted in Dodoma, Tanzania where he is allegedly seeking refuge.

A highly placed source told The Star that embattled Machar gained entry into Tanzania four days ago, and later was later spotted on Satellite.

The alleged presence of Machar in Tanzania coincides with the urgent visit of Cord leader Raila Odinga into the country.

Odinga, who was scheduled to preside over a function in Kisumu town on

Saturday, hurriedly left for a meeting in Tanzania on

A reliable source said the main agenda of the meeting held

today (Saturday) and attended by senior leaders from various countries was to dicuss Machar's presence in Dodoma.

The source who sought anonymity said more inner details of the meeting, where a Head of State was present, are still unclear since it was highly secretive.

According to the source, Machar’s presence in the country was deliberated during the meeting also attended by the vice president from a neighboring country.

returned to the capital Juba in April after a peace deal, but left again last month when new clashes broke out.

President Salva Kiir sacked Machar and replaced him with

Taban Deng Gai, his former ally after he failed

to honour ultimatum to return to Capital Juba.

has never made any statement since he was

replaced as vice president with Gai, according to the source.

Machar, the previous vice president, and the SPLM-IO group he leads, have been caught up with more than two years of on-and-off, ethnically charged fighting with supporters of the country's President Kiir.

weapons, including surface-to-air missile batteries, around Juba in "a serious and direct threat to the national security".

However, government military spokesman Lul Ruai Koang declined to comment on the detail of the accusation but said the army was authorised "to strengthen our air defence capability and to defend the territorial integrity of this country".

The alleged entry of Machar in Tanzania comes as the

authorised the deployment of a 4,000-strong protection force in South Sudan's capital, Juba.

The authorization is part of the U.N. peacekeeping mission and threatened an arms embargo if the government does not cooperate.

The U.S.-drafted resolution was adopted with 11 votes in favor. Russia, China, Egypt and Venezuela abstained.

This follows several days of heavy fighting involving tanks and helicopters in Juba last month between troops loyal Kiir and those backing former Machar that raised fears of a return to full-scale civil war in the world's newest nation.

The protection force of African troops will use all means to enforce peace in Juba and protect the airport and other key facilities, the Council said.

It would also act against anyone who is "preparing attacks, or engages in attacks" against U.N. sites, aid workers or civilians and could confront South Sudanese government troops if needed.

Hundreds of people have been killed and the United Nations said government soldiers and security forces executed civilians and gang-raped women and girls during and after last month's fighting.

However the Government of South Sudan denied the allegations.

The protection force will be part of the U.N. peacekeeping mission in South Sudan, known as UNMISS, in place since the country gained independence from Sudan in 2011. The force's chief will report to the UNMISS commander.

The council authorised UNMISS and the protection force until December 15, 2016.

East African bloc IGAD pushed for the creation of the Juba protection force.

South Sudan said it would accept a deployment of African troops in the capital, but on

voiced opposition to those troops being placed under U.N. command.

Post a comment
WATCH: The latest videos from the Star
by MAURICE ALAL @AlalMaurice
News
13 August 2016 - 15:00
Read The E-Paper