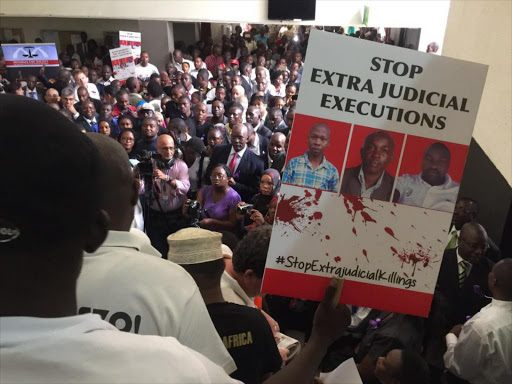 The High Court has allowed the LSK to seek compensation on behalf of the families of murdered human rights lawyer Willy Kimani, his client Josephat Mwenda and taxi driver Joseph Muiruri.

Justice Luka Kimaru further directed the Law Society of Kenya to amend its petition and file fresh documents at the constitutional and human rights division within 14 days.

Although the orders initially sought in the petition had been overtaken by events, the judge ruled that the case raised serious fundamental issues that need to be resolved by the court.

Kimaru ruled the three men were abducted and illegally held at a container at the Syokimau APs camp before they were killed.

He said a witness who rode by the camp heard someone make a distress call and that the person threw out a tissue paper message for his family to be called.

The judge noted Kimani championed human rights and was killed while performing his duties as an advocate.

He added it was evident police intimidated, threatened and shot Mwenda before charging him in court in attempts for him to drop his complaint with the IPOA.

Kimaru also said police lacked enthusiasm to investigate the incident when it was first reported, and only took action when the LSK took up the matter.