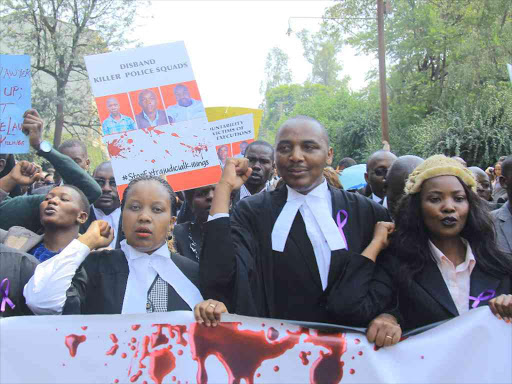 Lawyers demonstrate against the killing of Willie Kimani in Nakuru last month. /FILE

The agency said the ruling also augers well for hundreds of other Kenyans who have been executed or disappeared at the hands of the police.

Victor Odero, East Africa campaigner, termed the court’s determination as "a watershed moment in the history of justice in Kenya"

He said the decision sheds the spotlight on the common but under-reported scourge of extra judicial killings and enforced disappearances in the country.

Odero, in a statement, said the government should be compelled to recognise

Willie Kimani as a champion of justice as the courts had done.

"Willie was indeed a champion of justice. He dedicated his life to fighting extra judicial killings, but sadly met his end through the same violations he had worked so tirelessly to eradicate," he said.

"His death must not be in vain. The Kenyan government should take all measures to bring all those suspected of criminal responsibility for these crimes to justice, in fair trials," said Odero.

According to the activist, the government should set up a judicial commission of inquiry into extrajudicial killings and enforced disappearances to deliver justice to the numerous other victims.

Odero was responding to Thursday's

High court ruling that lawyer Willie Kimani and two others were subject to enforced disappearance and later executed by police.

Justice Luka Kimaru in his judgement said Kimani championed human rights and was killed while performing his duties as an advocate.

Kimaru noted it was evident police intimidated, threatened and shot Mwenda before charging him in court in attempts for him to drop his complaint with the IPOA.

He said police lacked enthusiasm to investigate the incident when it was first reported, and only took action when the LSK took up the matter.

The judge on behalf of the families of murdered victims.

directed the Law Society of Kenya to amend its petition and file fresh documents at the constitutional and human rights division within 14 days.