Watchmen, bouncers have power to arrest, search without warrant 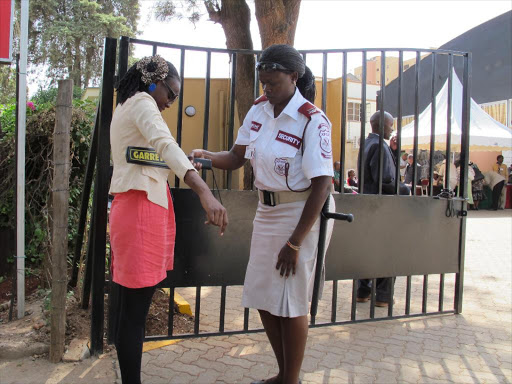 Private security guards now have powers to arrest and hand you over to police if you commit an offense within the premises they are securing.

The Private Security Regulation A, 2016 also allows private security providers including watchmen, bouncers, and guards to search any person entering or leaving premises within which they are providing security services.

“A guard or a security officer manning a building or responsible for any property may search a person on entry or exit of that building or property without a warrant,” the Act reads in part.

But the Act prohibits private security officers from infringing on constitutional rights while exercising such powers.

The Act provides for stiffer penalties for those who violate the rights of people being arrested, including cancellation of licenses and jail terms upon conviction.

Security firms are required to provide basic training for new employees where state institutions do not provide it.

They will be required to provide any information necessary for law enforcement or crime prevention, while respecting client confidentiality and without contravening the law.

The law also states that private security guards must not have any affiliation with political movements, paramilitary or criminal groups, or security agencies, according to the law.

The firms are restrained from hiring people dishonourably dismissed from disciplined services in the country or abroad, and guards must obtain police clearance forms before being employed.

The law also prohibits private security firms and guards from using or allowing the use of uniforms similar to those of discipline forces and national security organs.

Private security firms are restricted from branding their vehicles in colours resembling those of any of disciplined forces.

Use or installation of equipment capable of intercepting or otherwise interfering with another person's communication is prohibited.

The firms are also restricted from the installation of communication tools or systems capable of interfering with a communication system used by national security institutions.

The new laws will be operational once Interior CS Joseph Nkaissery forms a regulatory board recommended by the Act.