Somalia President wants total ban on miraa in his country 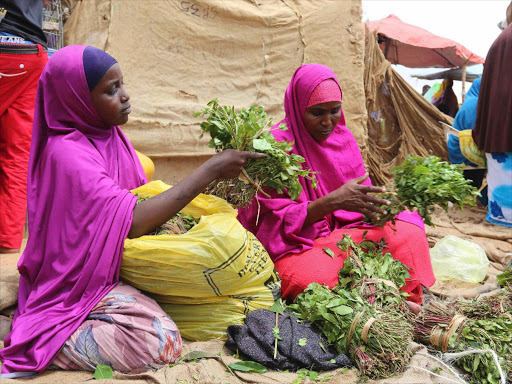 A woman and her daughter tie miraa into small bundles in Mogadishu on August 9, 2014 /REUTERS/FEISAL OMAR

Somalia President Hassan Sheikh Mohamud wants miraa banned in his country. This move is expected to deal a heavy blow to the already struggling miraa trade in Kenya.

Speaking in Mogadishu on Monday, Mohamud said the trade and consumption of the stimulant plant has a “devastating” impact on Somalis and must be banned. “Miraa has a devastating impact on society. We have a series of discussions and consultations and we agreed to end the trade of the narcotic leaf,” he said. “We will first act by reducing its trade and finally put an end to it.”

His action is seen as hitting back at Kenya’s plan to shut the Dadaab camp and the repatriation of Somali refugees. Somalia has termed the shutting of the camp “irregular”.

Kenya and Somalia also has a diplomatic strain resulting from the long-standing border dispute at the International Court of Justice. The hearing starts on September 19-23. Kenya has unsuccessfully attempted to convince Somalia to withdraw the case for local bilateral resolution. The disputed area in the Indian Ocean, stretch more than 100,000km, with huge oil and gas deposits.

President Uhuru Kenyatta has also threatened to withdraw KDF from Somalia, citing donor fund cuts. But observers believe, it is part of bigger scheme to “punish” the country, which is already struggling to defeat al Shabaab terror group.

Before President Mohamud’s announcement, Somalia had already imposed a 100 per cent tax on miraa. It is Kenya’s main miraa trading block, accounting for 90 per cent of exports.

An average of 16 flights depart to and from Mogadishu everyday carrying miraa, which is sold mainly in Mogadishu. Somalia’s fragile institutions may not, however, effectively implement a total ban on the miraa.