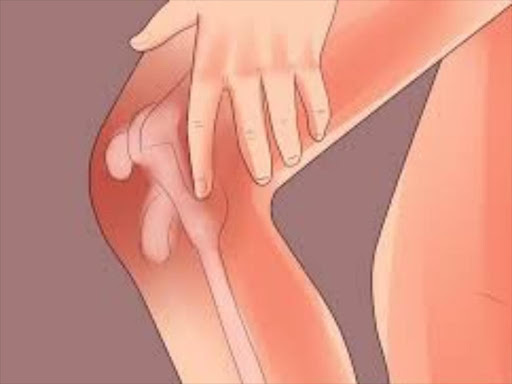 A graphic showing how Chikungunya infection causes the knee to bend. /FILE

At least 540 people were on Wednesday admitted to various health facilities in Mandera County following an outbreak of Chikungunya fever, health officials said.

The viral disease is transmitted to humans by infected mosquitoes.

Mandera Health chief officer Mariam Dubow said the number of patients is expected to go up as most schools were also affected.

She said health officials have been dispatched to schools to check the number of students who may have been infected.

The disease causes fever and severe joint pains as well as fatigue and muscle pain.

Other symptoms include headache, nausea and skin rashes.

The disease, which rarely causes death, may also manifest severe complications in some patients.

These include renal and respiratory failure, acute hepatitis and cardiovascular decomposition.

Health experts say the disease may sometimes cause intense pain to a point of disabling patients.

According to WHO, the disease shares some clinical signs with dengue, and can be misdiagnosed in areas where the latter is common.

The disease, WHO says, is common in Africa, Asia and the Indian subcontinent although it has

spread to Europe and the Americas in

The world health body says that more than 3 million people were affected by the disease in the last ten years.

The viral disease derives its name from a border area between Tanzania and Mozambique where it was first identified in 1952.

‘Chikungunya” is a word in the Makonde language in Mozambique which loosely translates to "that which bends up".

The name is in reference to the stooped posture that victims assume once they become infected.