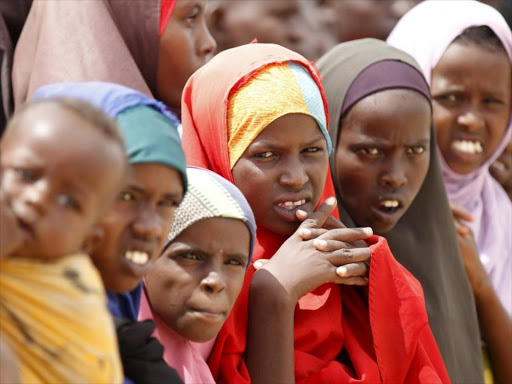 Somali refugees are pictured at the Ifo camp in Dadaab near the Kenya-Somalia border, May 8, 2015. Photo/REUTERS

The government announced on Friday it had disbanded the department of refugee affairs, the first step in closing Dadaab and Kakuma camps in Garissa and Turkana counties respectively.

Government says the country has hosted more than 600,000 for over 25 years.

A year ago, after the April terrorist massacre at Garissa University College, Kenya announced it would swiftly close both camps. That created an international outcry. Kenya backed down and said closure would be very gradual.

The specific reason for the surprise announcement was not immediately known.

"Due to Kenya's national security interest, the government has decided that hosting of refugees has to come to an end," he said.

"The government acknowledges that this decision will have adverse effects on the lives of refugees but Kenya will no longer be hosting them," Kibicho said.

the international community to back the move.

"The international community must collectively take responsibility on humanitarian needs that will arise out of this action," he said.

Kenya had said it would repatriate all Somali refugees and close camps in the northern region.

The closure notice comes in the wake of Interior CS Joseph Nkaissery sounding a warning that ISIS terror suspects were planning a massive anthrax attack on crowded venue.

Kenya had backtracked on plans to close down Dadaab after intense pressure from the international community having hosted more than a half a million refugees for more than two decades.

Nkaissery said more than 200,000 Southern Sudan nationals are living in the Kakuma camp.

So far, 4,214 Somali refugees have been repatriated under the UNHCR assisted programme.

Dadaab which is 80km from Somalia’s border, was set up by UN in 1991 for Somalis fleeing violence and famine in their home country.