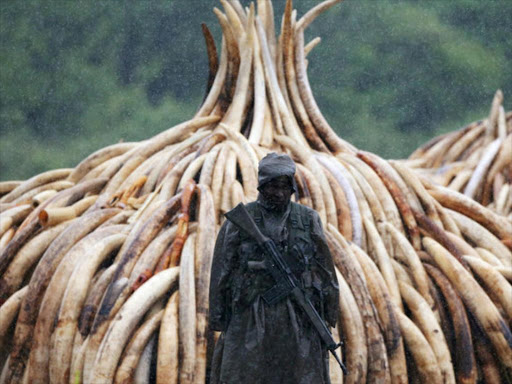 A Kenyan Wildlife Service ranger stands guard in the rain near stacks of elephant tusks, part of an estimated 105 tonnes of ivory and a tonne of rhino horn confiscated from smugglers and poachers to be burnt at the Nairobi National Park near Nairobi, Kenya, April 30, 2016. Photo/REUTERS

President Uhuru Kenyatta has arrived at the Nairobi national park where he is expected to lead the torching of tonnes of ivory.

This is part of efforts of the government to get rid of the poaching menace that has seen elephant and rhino population decline tremendously.

Kenyan park rangers piled up thousands of elephant tusks and rhino horns to burn on Saturday, sending a message to poachers and smugglers that their trade will be stopped.

Armed police guarded the area, on the edge of Nairobi National Park, where a tonne of rhino horn was added to 105 tonnes of ivory in a dozen large pyres.

Uhuru has said the ceremony will show

The incineration will be the world's biggest after

staged its first such burning in 1989. The ivory comes both from tusks seized from poachers or traders and others gathered from elephants that died of natural causes.

is seeking a total world ban on ivory sales when the Convention on International Trade in Endangered Species of Wild Fauna and Flora (CITES) meets in South Africa later this year as poaching poses an increasing risk to the species.

CITES banned commercial trade in African elephant ivory in 1989, but since then has permitted one-off sales.

Conservationists say that ban, and

Kenya's 1989 burning, helped relieve a crisis for the elephant population but that one-off legal sales have revived demand.

The situation for rhinos is more precarious. There are fewer than 30,000 left across Africa and one species, the Northern White Rhino, is on the brink of extinction. The last three are kept inKenya

relies on tourism, with many drawn to safaris at luxury camps by the trove of animalsKenya

"We have got to kill the trade in ivory once and for all," said renowned conservationist and anthropologist Richard Leakey.

Pledges last year by China and the United States, two of the biggest ivory markets, to enact almost complete bans on imports and exports have helped drive ivory prices lower.

But rhino horn prices are still rising, conservationists say. Armed patrols of sanctuaries and other measures have helped curb some illegal hunting but the animal's future remains grim.

alone had 20,000 rhinos in the 1970s, falling to 400 in the 1990s. It now has almost 650 black rhinos. It is protecting the last three northern white rhinos as scientists race against time to find artificial reproduction techniques.

can sell the horns of a single dead rhino for the equivalent of about $50,000 in local markets, earning in one night what would take them many years in regular employment.