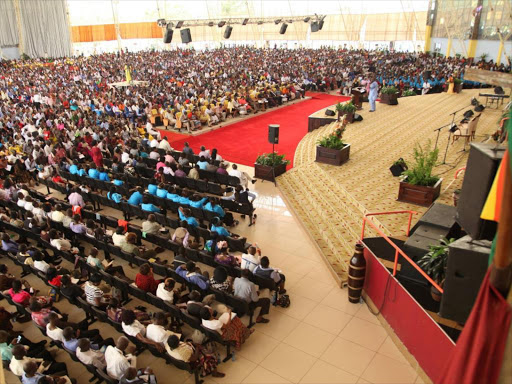 Congregation at a church in Mombasa.Photo/File

Church leaders have spoken against the registration of the atheist society by the Attorney General.

The Kenya National Congress of Pentecostal Churches and Ministries issued a statement on Friday, saying it was abominable, and unconstitutional to have the society registered and given a certificate.

“All people who believe in God, we register our disgust and protestation to AG for the way he has causally and in utter contempt been handling religious issues in our country. He has now touched nerves of every person of faith by registering a society that denies existence of God,” Stephen Ndicho the Congress vice chairperson said during the Friday briefing held at All Saints Cathedral.

Separately, the Muslims’ Shuura Council chairperson Abdullahi Abdi faulted the registration of the society saying that it not only goes against the constitution of Kenya; it mocks Kenya’s cultural and social norms.

“We are a people of faith, therefore registering any party that believes that there is no God is a mockery to people of Kenya. The danger is that we are now opening up to ideas that are out to promote immorality through erosion of our values, which are anchored on religion,” he said.

The Atheist Society of Kenya was registered early this year and has following of over 5000 members. The organisation embarked on a countrywide recruitment and is currently advocating for the scrapping off of religious studies from the syllabus.

“Our forefathers were ardent believers in Almighty God such that they inscribed tenets in our national instruments including the national anthem, which opens with a prayer “Oh God of All Creation”, and our Constitution which in the preamble acknowledges that we people who believe in God, therefore it contemptuous to register an organisation that defies the same Constitution,” Ndicho said.

“It is not only foolhardy to say in ones heart that there is no God, but most foolish to authenticate the same by issuing a certificate confirming the same. This is exposing our country to God’s wrath and courting disaster,” he added.

The Congress demanded that the society be deregistered failure to which they will go to court as well mobilise kenyans across the faiths to the streets until their demands are met.

“We also demand that the AG resign if he can’t advice the government appropriately on the sensitive matters of religion so as to cultivate a cordial relationship between the religion and state,” he said.