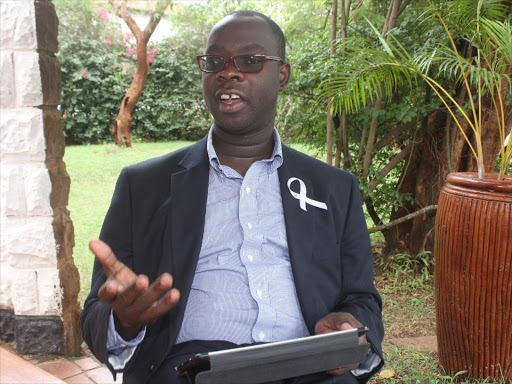 Kibra MP Ken Okoth in now calling for demonstrations outside parliament buildings next Thursday to compel his colleagues to pass the crucial two-thirds gender rule.

He accused Parliament of deliberately frustrating efforts to pass the Bill.

“Power is sweet and male MPs are not ready to lose it to women. You saw what happened yesterday (Wednesday)," he said.

Legislators on Wednesday failed to marshal enough votes to pass the Bill proposed by moments after passing an amendment bill that that bars courts from meddling in parliamentary affairs.

Some 195 MPs voted in favour of the gender Bill,

falling short of the required 233 votes after 25 voted against it.

A number of them abstained, but did not give reasons for the same.

The Bill states that no

can have more than two-thirds of its members in elective or nominative positions in either house.

Okoth said if MPs fail to pass the bill next Thursday during the repeat voting, it will now be upon those in support of the proposed law to rally the public to hold demonstrations in push for its enactment.

“Why are you afraid of teargas when school children in Lang’ata prevented very powerful people from grabbing their land? What is about to be stolen from you is more important than land,” Okoth said. “If you don’t know how to do it, seek consultancy from activists like Bonface Mwangi. Strip if you must.” he added.

The MPs who voted against the proposal defied President Kenyatta and CORD leader Raila Odinga who have been lobbying for the gender rules to be effected.

May 5 in a second attempt to raise the two-thirds majority needed to pass the law.

Okoth however says that MPs are unlikely to pass the bill.

“MPs know there is no political price to it. They have nothing to lose. It’s a non-issue. Unless you create demand, they won’t respond,” he said.

The legislator made the remarks on Thursday at a round table meeting with members from the Association of Women Media in Kenya (AMWIK) at the Sarova Stanley hotel.

He said that he will try to lobby his ODM colleagues who did not vote on Wednesday and see if that will make a difference during Thursday’s voting.

"But even then, if it’s about lobbying, haven’t I lobbied enough already?” he paused.

Post a comment
WATCH: The latest videos from the Star
by EMMANUEL WANJALA
News
29 April 2016 - 03:00
Read The E-Paper