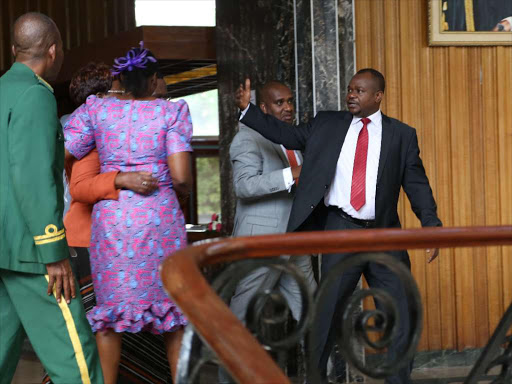 MPs yesterday failed to pass a crucial bill to effect the two-thirds gender rule, despite a passionate appeal from President Uhuru Kenyatta.

“I call upon all our members to vote for this bill. We need to pass this bill into law to comply with the constitutional provisions on the composition of elective offices in Kenya. The people of Kenya are waiting to see you make history this afternoon,” Uhuru said in a statement ahead of the voting.

But the lawmakers failed to make history and did not enact the enabling legislation to ensure equitable gender representation in Parliament.

In a day of haggling and intense lobbying by women MPs preceded by a dinner hosted in honour of their men counterparts to appease them to pass the bill, only 195 MPs voted in its support, despite 242 members being present.

Women MPs under their KEWOPA caucus had on Tuesday hosted the men in a special dinner at Hotel Intercontinental to lobby for their support.

But when voting time came yesterday, 28 MPs voted against the bill while 19 two abstained.

Speaker Justin Muturi ruled MPs will vote again next Thursday after those who voted against the bill failed to raise a one-third minority requisite in objecting to a constitutional bill.

The bill stipulates that one cannot be nominated for a special seat for more than two terms.

It says the provision for the special seats will lapse 20 years after the 2017 elections.

The constitution does not stipulate the formula through which the two-thirds principle should be achieved.

It leaves it to the state to put in place a law for the purpose.

The bill introduces new clauses to Articles 97 and 98 to alter the composition of the National Assembly and the Senate.

The bill also introduces new clauses to Articles 97 and 98 to ensure the special seats are allocated proportionate to the number of seats won by a political party, determined after a general election.

Majority leader Aden Duale urged the Speaker to allow the vote to be retaken after five sittings as provided for in the standing orders.

“What we are doing is historic in the sense that we will achieve what the ninth and the 10th Parliaments could not achieve. The 11th Parliament will go down in history as the House that has implemented the constitution. This is one of the pieces that will complete the implementation of the constitution,” he said.

Standing Order 62( 2 ) says whenever a bill or special motion fails to get the required majority and those against it are not a third of the total number of members, the Speaker may direct that a further vote be taken after five sittings.

Muturi drags MPs in to vote

Speaker Justin Muturi was yesterday forced to literally drag MPs into the Chamber to pass the two-thirds gender rule. For nearly one hour, the House could not raise the 233 members required, forcing the Speaker to order the opening of the bars thrice within that period for MPs to make their way in. Muturi later exerted his powers and directed majority leader Aden Duale, minority leader Francis Nyenze and whips to exit the Chamber and bring in all members who had skipped the sitting. “Due to the nature of this matter, I again order that the bars be opened and all House leadership responsible for whipping do their job,” he said.