[VIDEO] NCIC identifies 19 counties at risk of violence in 2017 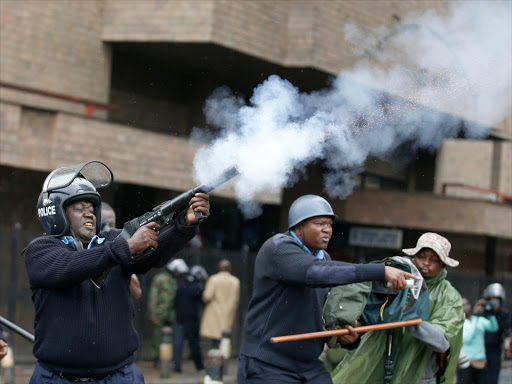 Nineteen counties have been identified as possible election violence hot spots in 2017.

An internal report at the National Cohesion and Integration Commission has termed the mapped counties as "problematic and requires close monitoring," failure to which may lead to instability.

Chairman Francis Ole Kaparo said his commission "is doing a lot more to ensure no violence rocks the 2017 general elections."

The government is laying down an elaborate operation plan including massive public education on peace during the general election.

Government spokesman Eric Kiraithe yesterday said that government's electoral plans are watertight and will not condone any form of chaos before, during or after the election.

"The government will have an inter-agency approach in managing chaos during the election. We know there are those who want to cause chaos but we will dialogue with them because all Kenyans must enjoy equal rights and freedoms in the constitution," Kiraithe said.

Counties with perennial border conflicts are among those on the watch list.

Last year community clashes broke out between Maasai and the Kalenjin at Olpusimoru where several people were killed and several houses torched.

Clashes also occurred in Kisii County but local leaders intervened and resolved the matter. Parts of Meru and Isiolo have recently become a no-go-zone after clashes between the neighbouring communities paralyzed transport. Leaders from the two counties openly clashed in Parliament early this year.

Cattle rustling-prone areas of Turkana and Pokot also pose a threat to the smooth running of elections in 2017, according to the NCIC.

Counties likely to have tight contests in the governor and senator elections will also be closely monitored.

In Parliament last month Police IG Joseph Boinett warned that some governors are financing gangs for the 2017 campaigns.

In Western Kenya, Kakamega and Bungoma are on the watch list after the clash last month of ODM and Ford Kenya supporters during the launch of Moses Wetangula's presidential bid in Muliro Gardens.

The NCIC report has been prepared at a time of collapsing public confidence in the Independent Electoral and Boundaries Commission. The opposition Cord coalition has been fiercely critical of the electoral body which it claims has become partisan.

NCIC says additional police will be deployed between July and August this year to the 19 counties at risk although the election will not be until August 2017. They will be equipped with recorders to collect hate speech and incitement remarks.

The commission will also recruit 100 people to work as "peace monitors" from July and deploy them to the trouble spots.

Last week the National Council of Churches demanded electoral reforms and a new Supreme Court to avert chaos in 2017.

"A close analysis of the possible scenarios particularly around presidential and gubernatorial contests paint a picture of a country that is characterized by desperation and militancy which can tear the country and counties apart, leaving in their wake deeper wounds than we have experienced before,” NCCK Secretary General Peter Karanja said while addressing the press at Jumuia Place in Limuru last Friday.

In recent rallies Cord leaders Raila Odinga, Kalonzo Musyoka and Moses Wetangula have threatened to boycott the 2017 polls if IEBC is not disbanded. Yesterday they were teargassed as they attempted to make an unscheduled visit to the IEBC headquarters.

Heightened political activity by both Cord and Jubilee pushed the NCIC to conduct an early mapping of hot spots.

The commission says it does not want a repeat of the 2007-08 post election violence.

The commission says it will work with the office of the Director of Public Prosecutions to ensure cases on hate speech are thoroughly prosecuted. It says it has identified notorious politicians who incite the public at rallies. It will assign secret agents to follow,monitor and keep track of their movements and utterances within the campaign period.

"We are going to be very aggressive on hate speech because we want to ensure there is peace before, during and after the election," Kaparo told the Star yesterday.

The NCIC also intends to engage the National Police Service through the Ministry of Interior to allocate between 800-1000 police officers to work with them countrywide with equipment to record hate speech.

The officers will undergo training before they are deployed, including on how to keep evidence on hate speech.

According to Kaparo, each of the 290 constituencies will receive two or three officers depending on its geographical size and whether it has been classified as a hot spot.

He says they are taking a multi-sectoral approach and have included the Ethics and Anti Corruption Commission, the Office of the DPP, Office of the Ombudsman, Office of the Registrar of Political Parties and the Judiciary.

However the bulk of the conflict emergency fund has been retained at the Ministry of Interior which has limited the operations of the NCIC.

Post a comment
WATCH: The latest videos from the Star
by STEPHEN OLE LETOO @StevoLetoo
News
26 April 2016 - 05:00
Read The E-Paper