KDF soldier kills girlfriend, self after getting dumped 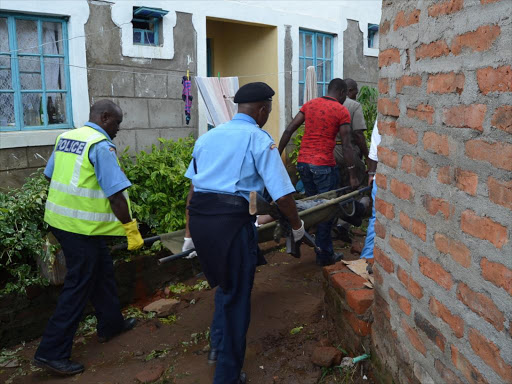 Police officers carry the body of a Kenya Defence Forces officer who killed his girlfriend and then shot himself after she allegedly broke up with him in Kitui town, April 25, 2016. Photo/MUSEMBI NZENGU

The 30-year-old soldier, based in Mariakani at the Coast, attacked the pharmacist, 25, after she broke up with him for another man.

"The soldier came to our plot at midnight and knocked at the girl's door but she declined to open. He went away but returned in the morning as the girl prepared to go to work," said a neighbour.

The witness said a bitter exchange ensued after which the woman ran to a neighbour's house.

"He followed her and sprayed her with bullets.

He shot the girl several times until she died. He then dashed to another room in the compound and locked himself inside," he said.

Kitui Central OCPD Kennedy Osando arrived moments later with a contingent of police officers but the soldier is said to have continued shooting to scare them.

"Police lobbed teargas canisters into the house. When he sensed he had been cornered, he shot himself dead through the jaw. The bullet exited from the right side of his head,"he said.

Police found a gun and a fully loaded magazine when they broke into the house.

Sources said the couple hailed from Kyusyani area of Lower Yatta in Kitui. Their bodies were taken to Kitui County Referral Hospital mortuary.