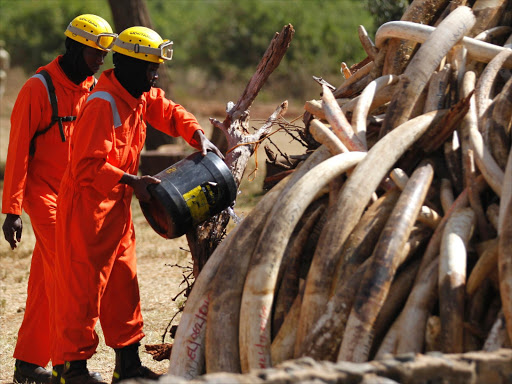 A Chinese man found with worked ivory valued at Sh60,000 was arrested at the JKIA in Nairobi on Monday night.

The 40-year-old was on his way from

Cameroon to Guangzhou in China when he was arrested, police said.

They said he will appear in court on Tuesday to face charges of trafficking ivory.

Several foreign nationals have been arrested at the JKIA with drugs and illegal ivory.

Yang Yu and Xu Miaohong were arrested by KWS officers from the Canine Unit while on their way from Lagos in Nigeria to Guangzou.

Udoto said Miaohong was apprehended for having two pieces of raw ivory, an ivory bangle and an ivory comb, all weighing 1.04kg, and 500g of pangolin scales.

for handing in all wildlife trophies, ivory and rhino horn ahead of the biggest burn in April.

Environment CS Judi Wakhungu said anybody with items including jewellery made from ivory should surrender it to the nearest KWS office.

President Uhuru Kenyatta, patron of the Giants Club summit comprising Uganda, Gabon and Kenya, will preside over the

of ivory collected so far.