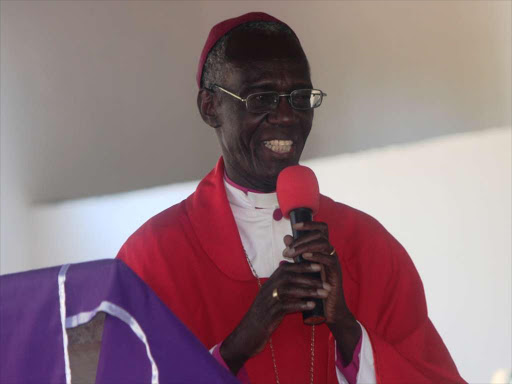 Six clerics have been nominated to vie for the position of Anglican Archbishop to succeed Eliud Wabukala who will retire this year.

also serve as Bishop of All Saints' Cathedral Diocese.

Wabukala is the fifth since the province of East Africa was divided into the provinces of Kenya and Tanzania.

The Archbishop will perform the following functions:

a) To exercise spiritual leadership in the Anglican Church of Kenya and to have and hold such authority and rights of supervision as are committed to him in virtue of his office in accordance with the provisions of the ACK Constitution and the several Diocesan Constitutions.

b) To summon and to preside over the Provincial Synod or its Standing Committee and the House of Bishops and the Episcopal Synod.

c) To perform the duties assigned to him under Article XI on Election of Bishops and any Canon connected therewith.

d) To visit officially any Diocese of the Province as Metropolitan in accordance with any Canon in that behalf.

e) To represent the Province in its relation to the rest of the Anglican Communion and to other Churches, and on its behalf correspond with other metropolitans.

f) To be the spokesman of the Church in national and international issues and forums in consultation with the House of Bishops where necessary.

g) To perform such other duties as may be entrusted to him by the Provincial Synod.