Uhuru to host Museveni for talks on Uganda-Kenya oil pipeline 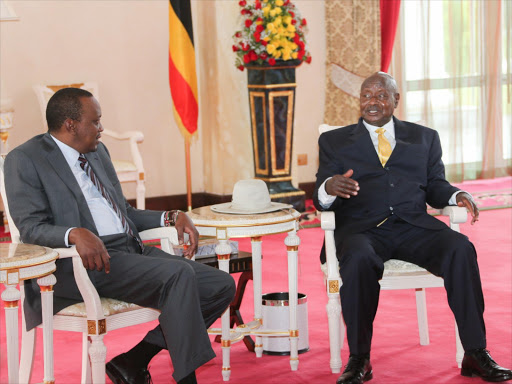 Presidents Uhuru Kenyatta and Yoweri Museveni (Uganda) will meet on Monday to discuss the construction of the Uganda-Kenya oil pipeline.

The pipeline project was designed to move crude oil from the oilfields of Hoima to the Port of Lamu through Kenya’s own oilfields at Lokichar.

two leaders said the development of a crude oil export pipeline needed to be implemented expeditiously.

"This will avoid any further delays in commercialising, especially Uganda’s petroleum resources, which were discovered nine years ago," he said in a statement to newsrooms on Sunday.

"This will transform infrastructure and the way of life of the people in the towns and counties across its path," he said.

In August 2015, Uhuru and Museveni agreed to develop a pipeline capable of transporting imported petroleum products to Uganda from Mombasa via Eldoret to Kampala.

They also exchanged views on the political and security developments in the region.