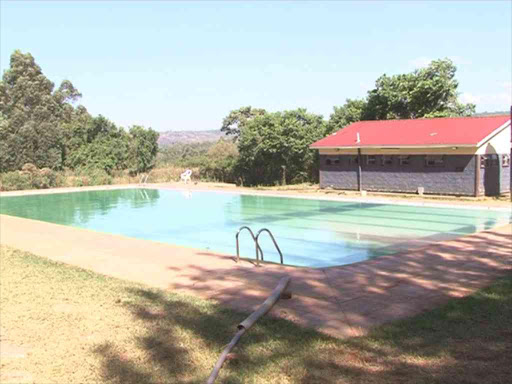 The swimming pool at Friends school Kamusinga in Kimilili constituency, Bungoma county where a form one drowned. Photo/BRIAN OJAMAA

A form one student at Friends School Kamusinga in Bungoma drowned in the school's swimming pool on Monday evening.

Mutiso was picked to the school swimming team.

"We send condolences to the parents of Mutiso. As a school this is the first time we have had such a tragedy and we would like parents and neighbours to stand with us in this difficult and sad moment," he said.

Namachanja said his parents had been informed adding a pastor had been called to offer students guidance and counseling.

Mutiso, who was to represent the school in the regional swimming competitions slated for next month, was in the company of fellow students and the team coach.

The principal said Mutiso dived into the deep end when he choked as he tried adjusting his costume which had come off, and sunk to the bottom of the pool.

Namachanja said students screamed for help and the pool attendant dived in to save him.

"The boy drank a lot of water and was rushed by the school van to the nearest Kimilili subcounty hospital where he died while receiving medication," he told journalists on Tuesday.

Bungoma director of Education Charles Anyika, who visited the school, said the institution lost a prominent swimmer who was to take the school to the national level.

He urged institutions with pools to take precaution while training students in swimming lessons to avoid such occurrences.

"We are appealing to all schools to have proper First Aid equipment to save lives in case of such eventualities."

The body was taken to Dreamland morgue in Kimilili.