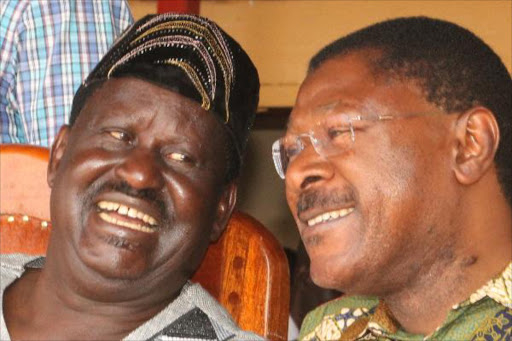 OPPOSITION chief Raila Odinga has assured his support base it will not be possible to rig him out in the 2017 presidential contest.

During a strategy meeting two weeks ago, Raila and his ODM confidants discussed anti-rigging mechanisms.

Apart from running a parallel electronic vote tallying system, Raila and the Cord team plan to train and deploy party agents in every polling station across the country.

The agents will be equipped with mobile phones and will take and transmit to the national tallying centre images of every result announced in streams.

“Just register, vote and leave the rest to me – but, this time round, am not coming to tell you my votes have been stolen,” Raila said on Ramogi FM, a Luo vernacular radio station.

Raila has long complained that his victories were stolen in 2007 and in 2013.

Yesterday he also said there would be no more nomination fiascos in his ODM party that have often been blamed for puncturing his presidential bid.

This is the latest indication that the former PM is laying the groundwork for a do-or-die political battle against President Uhuru Kenyatta.

Raila's supporters, especially on his Nyanza home turf, have asked the Cord leader to offer them what they term a “Plan B”, amid fears Uhuru may be unwilling to relinquish power in the event of an ODM win.

Raila narrowly lost to President Mwai Kibaki in 2007 and by a wide margin to Uhuru in 2013, on both occasions alleging massive rigging.

In a bid to stem nomination fallouts, Raila said the ODM primaries would be conducted six months to Election Day, “so that in areas where people are dissatisfied, the process is repeated”.

It is understood that Raila has told ODM leaders that they must do everything they can to ensure the party nominations are fair, with only the most popular candidates getting the ticket.

The next election could be Raila’s last serious attempt at the presidency, and people close to him say he is leaving nothing to chance.

On Ramogi FM, he urged his troops to take ID cards and voter’s cards in large numbers, saying registration is the only weapon that will remove Uhuru from State House.

He said at least two million of his supporters did not vote in the last election,

And he had no kind words for the Kenyatta Administration, declaring, “corruption runs in Jubilee blood”.

He gave what he called the example of former Devolution Cabinet Secretary Anne Waiguru, who resigned over Sh791 million graft allegations but is now positioning herself for the Nairobi gubernatorial contest.

“Corruption cannot end under the Jubilee government. It is the way they live. Corruption is what they know. That is what they learnt under Kanu. The only cure available to Kenyans is to prepare and vote out Jubilee,” Raila said.