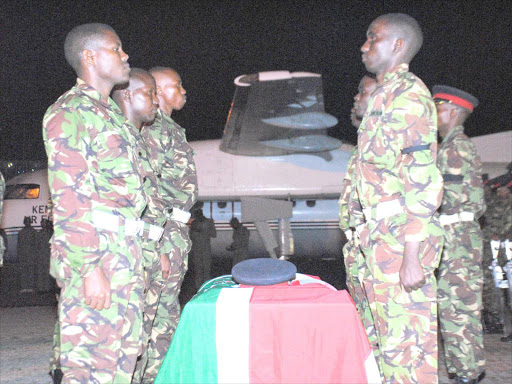 TRAGIC: KDF pallbearers at Wilson Airport on Monday with the casket of a colleague slain in Somalia. Photo/Patrick Vidija

There were 240 Kenya Defence Force (KDF) in El Adde camp at the time of the attack by al Shabaab on Sunday, according to sources.

The base was led by one Major and four Captains and shared one compound with the Somalia National Army.

About 100 KDF soldiers are feared dead and an unknown number are missing, some kidnapped and held hostage by the attackers.

Military spokesman David Obonyo disputed that there were 240 KDF officers at the camp, but would not give the exact number. He maintained that it was a company size team of soldiers.

A company is a military unit led by a Major or Captain, comprising three platoons each commanded by a Lieutenant with a total number of between 80 and 250.

A top general of the Somali National Army yesterday said Kenyan soldiers were warned of the attack on their base.

General Abbas Ibrahim Gurey, commander of SNA in Gedo region said KDF commanders had actionable intelligence on the impending attack on the base.

"It was information we knew, the information was received, and they (KDF) were ready for it," Gurey told Voice of America Somali Service.

He said the military were tipped by the Somali army and locals that heavily armed Al-shabaab group were spotted nearby days before.

The Somali army camp is said to be 600 meters away from the base where the Kenya soldiers were attacked.

Military officials including Chief of General staff Samson Mwathethe said the two camps were hit simultaneously during the pre-dawn attack on Friday morning.

Strangely however, there are no reports of any casualty suffered by the Somali Army. Sources in Garbaharey, the capital of Gedo region, say the SNA camp was actually empty of soldiers when the suicide bombers rammed the gates of the KDF camp. They left hours before the attacks, sources said.

"It is not true that KDF received information of the impending attack and ignored it. In a war zone we collect all information, verify and use it. No military can afford to ignore intelligence information in such a situation. We use information from many organisation that work with us even outside Somalia and pass it on to our troops in Somalia," Col Obonyo said.

Two trucks laden with explosives drove into the camps and detonated, followed by heavily armed militia who overran the camp.

The mobile phone service provider that serves the area was off network before the attack. Obonyo yesterday said that there are reports that the mast of the company, Hormuud, might have been interfered with on the night of the attack to disrupt any communication before the invasion.

The KDF camp's internal communication was also cut off when the terror group's explosive laden vehicle was blown up within the camp.

Col Obonyo said that the rescued soldiers are being treated and some are undergoing counseling. They will then be debriefed to enable the military to comprehensively give an accurate account of what happened.

EDNF troops had only recently been deployed to Kismayo port which is in Amisom's Sector II manned by KDF and Burundi after the 850 strong Sierra Leone Armed Forces left following the end of their tour of duty.