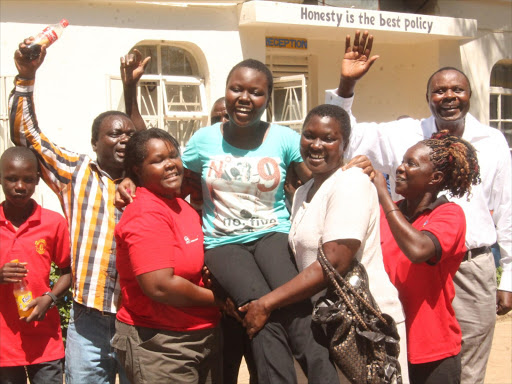 TOP primary schools in Kisumu county are celebrating their good performance in the 2015 KCPE exam.

Teachers, students and parents took to the street yesterday in song and dance to celebrate the grades.

Headteacher Marcellus Okweya told the Star more than 20 students scored more than 400 marks out of 500.

The students attributed the good results to hard work by teachers, parents and themselves.

Achieng said she had hoped to get more than 400 marks but surpassed her expectations.

She said she hopes to be a genetic engineer.

Awino hopes to be a lawyer, while Adhiambo wants to be a neurosurgeon.

She praised her parents “for supporting me" and her teachers for the "constant encouragement in studies”.

He said last year, the school took 47 students to national schools out of 102 candidates.

The headteacher attributed the school's success to teamwork from teachers, parents and the school management board.

He also cited discipline and hard work by the students.

School chairman Peter Sewe praised the headteacher and his team of teachers for posting good results.

He said the sub-committee on quality assurance and standards greatly helped in the achievement.

Sewe said the school has set high standards and should maintain them.

The three attributed their success to hard work and support from teachers and parents.