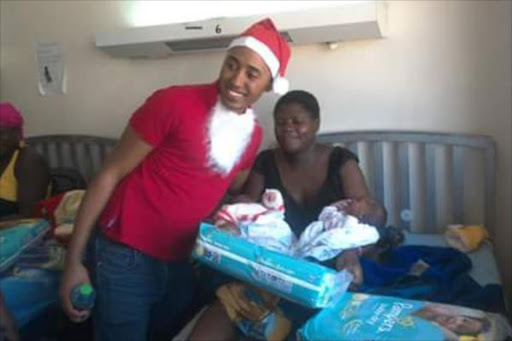 Muhoho Kenyatta when he donated diapers to the maternity wing at KNH. Photo/Courtesy

The money will cater for medical bills for needy children at the hospital.

"Thanks to Muhoho Kenyatta for taking your time to visit the KNH Children's Cancer Ward and Maternity Wing. Muhoho did a wonderful thing that will help the kids," the hospital posted via Facebook on Tuesday.

Muhoho's actions elicited a mixture of praise and criticism on social media, with Nairobi senator Mike Sonko among those who lauded the effort.

"At least now I will get diapers for the little angles I take care of. Thanks Mr. Muhoho baraka tele!" posted Mollyne Otienoh.

"Muhoho you are so kind. I remember when you visited my friend after she was involved in a car accident that broke her spine. I want to thank you and to let you know that she was flown to India for further treatment," she said.

Some users invited Muhoho to give to causes they are involved in, with one suggesting the President's son "form a group to start philanthropy on kids with cancer".

But others did not take his actions kindly.

"With good governance and corrupt free regime, Muhoho didn't have to spend his leisure time at Kenyatta hospital. The hospital should be well equipped to undergo its duties while the boy continues with his golf!" one Oyieko said.

Another user, Dennis Gitonga also took issues with the gesture saying, "When you help, don't let others know not unless you doing it for fame."

"This is hypocrisy of the highest order. If they are serious helping the poor why not sell that land they own and equip hospitals with dialysis machine!!!" posted Robert Onyambu.