Bill To Give KDF New Powers 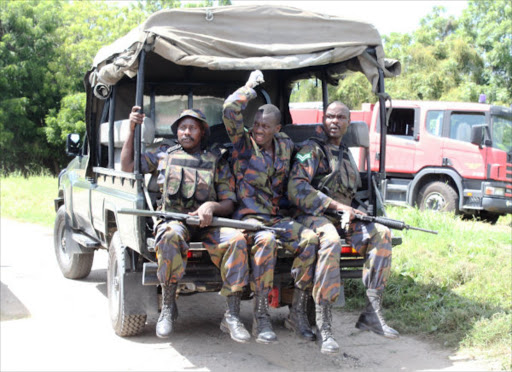 The Bill will give the military new powers and financial independence and limit the role of the Defense Cabinet Secretary.

Currently, the law provides that KDF funds appear in the Budget as a separate vote under the Defense ministry.

The Defense CS will be reduced to a peripheral role.

Previously, the CS defended the budget for the military. Reportedly the Defence CS Rachael Omamo and Chief of Defense Forces General Samson Mwathethe are not aware of the proposed changes.

The constitution says that if soldiers are deployed locally, they will be under the command of the Police.

It is clear in the proposed law that the KDF will not be under the command of the IG at any time.

The bill removes the requirement that the Defence CS’s annual report include itemized statements on utilization of public funds.

The bill, signed by Majority Leader Aden Duale, gives the President the freedom to extend the terms of office of the Chief of the Defense Forces, the vice chief and the service commanders.

This would overturn the requirement in the constitution that the CDF, his Vice and the service commanders serve for a single term of four years or retire upon the attainment of the mandatory retirement age (64), whichever comes first.

The KDF Amendment Bill allows court martials to try civilian suspects and the KDF to pacify the kind of court a suspect can be referred to.

The Bill limits the power of the CS to assign any duty to the CDF or any member of the Defense Forces. The Bill argues that the CS cannot delegate civilian functions to the CDF and vice versa.

It also wants the Kenya Wildlife Service, Kenya Forestry Service and National Youth Service to form the auxiliary reserve forces of the KDF.

The Bill extends from 28 to 60 days, the period in which the President can call out the auxiliary forces to assist the police in situations of emergency, disaster, insurrection, hostilities, unrest or instability.

It also seeks to remove the requirement that the Defence Council advertise recruitment in each county at least thirty days in advance, meaning that less favoured regions could be excluded.