NDMA says the most affected counties are Marsabit, Mandera, Garissa, Baringo and Isiolo

•Severe wasting – which makes children dangerously thin – is the worst form of undernutrition. 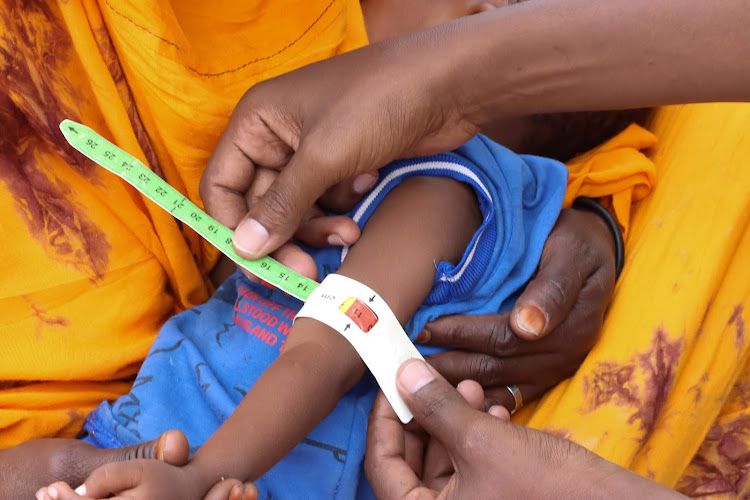 The red portion of the mid-upper arm circumference (MUAC) tape indicates the patient is severely malnourished and at risk of death
Image: FILE

Severe wasting, which makes children dangerously thin, is the worst form of undernutrition.

The public agency responsible for drought response has now advised that therapy for severe acute malnutrition, such as Ready-to-Use Therapeutic Food (RUTF) and Ready-to-Use Supplementary Food (RUSF), be sent to children in affected counties.

“This is mostly attributed to the continued decrease in milk production and consumption at household level, as well as poor dietary diversity, poor child feeding practices, and reduced food intake at household level,” the NDMA said in a statement.

This is because they easily develop common childhood illnesses such as diarrhoea, pneumonia, and malaria.

Those who survive can experience severe and almost permanent effects on their cognitive abilities and may never perform well in school or in life.

Although the government has not reported how many children are within these critical stages of malnutrition, United Nations agencies and NGOs in northern Kenya say there are thousands.

For instance, Unicef has appealed for US$137 million in donations for Kenya this year, saying 238,373 children, six-59 months old with severe wasting, will be admitted for treatment.

“Funding for this Humanitarian Action for Children appeal will support urgent life-saving nutrition, WASH (water, sanitation and hygiene) and health interventions, which combined account for nearly 69 per cent of the total ask,” Unicef says in its 2023 funding request.

Medical charity MSF, which has been working in Illeret, Marsabit county, said one-third of Illeret’s children under five years are malnourished.

“Since mid-March MSF has been working with community health educators and volunteers in support of the Kenyan health authorities to strengthen the integrated management of acute malnutrition,” MSF said in a statement released on Thursday last week.

“From March to December 2022, MSF has screened 24,182 children under five for acute malnutrition, newly screening 4,923 children from the community and enrolling 1,354 malnourished children in the malnutrition program while referring three to the nearest higher-level facilities,” MSF added.

"The drought situation remains critical in 22 out of the 23 arid and semi-arid counties following poor rains through October to December when the short rains season usually appears," she said.

Recent studies suggest that severely acutely malnourished children above six months of age with no medical complications can be managed at the community level using ready-to-use therapeutic foods. They do not need admission in health facilities.

NDMA, which released its assessment on Thursday, blamed the situation on the late onset and poor performance of the October to December 2022 short rains, coupled with four previous consecutive failed rainfall seasons.

Taita Taveta, Kwale, Garissa and Tana River improved from alarm to alert phase due to light showers received during the last week of December.

No child has died due to drought, says state

Over 960,000 malnourished children have been reached with nutritional supplements.
News
2 weeks ago

Non-Asal counties in need of relief food as drought bites

At least 4.35 million Kenyans are in dire need of relief food
News
2 weeks ago

It was largely responsible for dry weather in the last four seasons; but weatherman says too early to celebrate
News
2 weeks ago
Post a comment
WATCH: The latest videos from the Star
by JOHN MUCHANGI Science Editor
Health
12 January 2023 - 22:00
Read The E-Paper