Learn what causes bowel cancer and the symptoms that you should look out for.

Dame Deborah James, who has died from bowel cancer at the age of 40, told everyone to check their poo as part of her campaign to raise awareness of the disease.

We answer the questions that many are asking about one of the most common types of cancer.

How do I spot bowel cancer?

There are three main things to look out for:

There may be other symptoms too, such as:

Having these symptoms doesn't necessarily mean it's bowel cancer, but advice is to see a GP if you notice them for three weeks or longer and if things just don't feel right.

That means they can be checked out quickly. The earlier cancers are diagnosed, the easier they are to treat.

Sometimes bowel cancer can stop waste passing through the bowel and this can cause a blockage. This can bring on severe tummy pain, constipation and sickness. You will need to see your GP or go to your nearest A&E straight away in those circumstances. 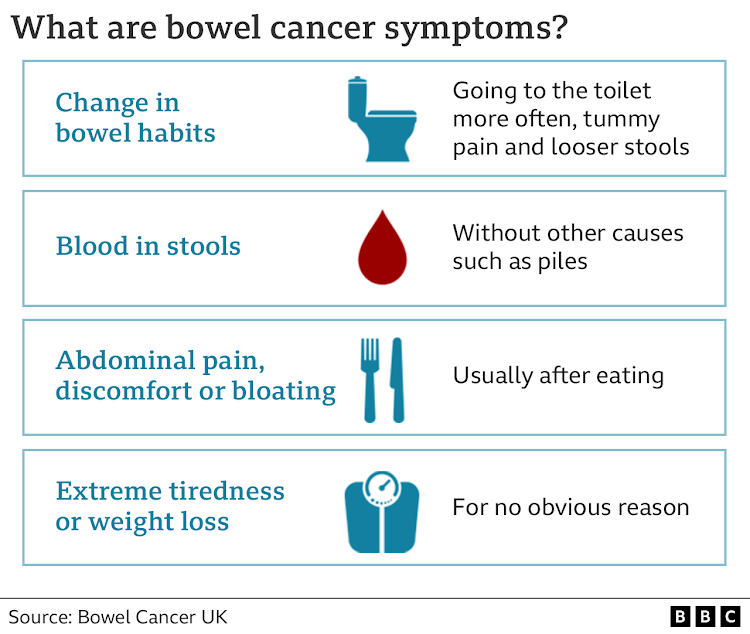 How do I check my poo?

Have a good look at what comes out when you go to the toilet and don't be embarrassed to talk about it.

You should be looking out for blood in your poo as well as bleeding from the bottom.

Bright red blood may come from swollen blood vessels (piles) in your back passage, but it could also be caused by bowel cancer.

Dark red or black blood in your poo may come from your bowel or stomach, and could also be worrying.

You may also be noticing a change in bowel habit, such as looser poo or pooing more often than normal.

Or you might feel you're not emptying the bowels properly and not going often enough.

Bowel Cancer UK recommends keeping a diary of symptoms before you visit your GP so you don't forget anything at your appointment.

Doctors are used to seeing lots of people with a variety of bowel problems, so tell them about any changes or bleeding so they can find out the cause.

No-one is sure exactly what causes it, but there are some things which can make it more likely to develop:

Does it pass down through families?

In most cases, bowel cancer isn't hereditary but you should tell your GP if you have any close relatives diagnosed before the age of 50.

Some genetic conditions, such as Lynch syndrome, mean people have a much greater risk of developing bowel cancer, but these can also be prevented if doctors know about the condition. 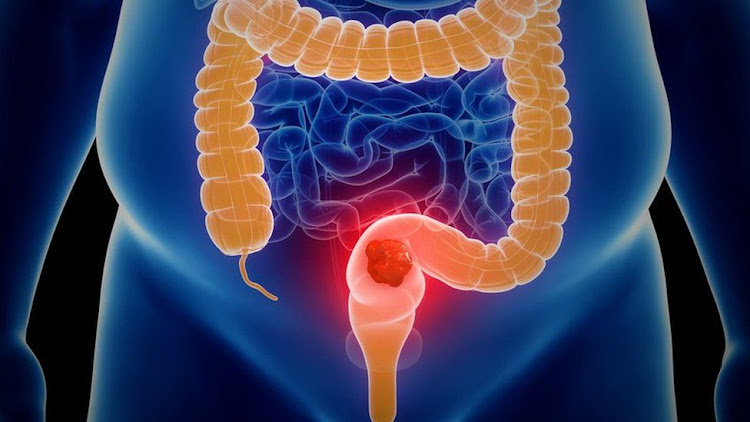 How to reduce your risk?

More than half of bowel cancers could be prevented by people following a healthier lifestyle, scientists say.

That means taking more exercise, eating more fibre and less fat, and drinking about six to eight glasses of water a day.

But it also means going to your GP with any concerning symptoms and taking up the offer of cancer screening as soon as it is offered.

How is bowel cancer diagnosed?

Once you've returned your home test kit, you'll either be given the all-clear or contacted by your local hospital for further tests.

These could be a colonoscopy - a procedure which uses a camera inside a long tube to look inside the whole bowel - or a flexible sigmoidoscopy, which looks at part of it.

More than 90% of people diagnosed with bowel cancer at its earliest stage will survive for five years or more - compared with 44% when diagnosed at the latest stage.

The chances of survival in the UK have more than doubled in the last 40 years - more than half of patients now survive for 10 years or more, compared with one in five in the 1970s.

Like many cancers, 15 to 40-year-olds have the highest survival rates, because cancer is more common and more deadly in older people.

However, in general, survival is still not as good in the UK as the rest of Europe.

What treatments are available?

Treatments are becoming more personalised, and advances in genetic testing mean care can be tailored to the way each individual deals with their body's own cancer.

This approach still needs refining, but it is promising extra years of life for those with cancer.

At whatever stage your cancer is spotted, you will be talked through the treatments available.

That might be surgery, or chemotherapy and radiotherapy, or one or the other depending on your individual cancer.

Bowel Cancer UK has advice on the best questions to ask at appointments with specialists.

What are the different stages of cancer?

A staycation to behold at Dream Farm in Kajiado

This writer and her colleagues toured the farm and experienced its allure.
Sasa
1 month ago

He said the notion of drinking eight glasses a day is unrealistic and people should listen to their bodies.
Sasa
1 month ago

Githeri is a simple, budget-friendly dish with its origins rooted in Kenya.
Sasa
1 month ago

The error was affecting both iPhone, Android, as well as those on desktop.
News
1 month ago

The current search button on the taskbar, can be disabled and only shows the search logo.
Sasa
1 month ago

Kang'ata leads at 58 per cent followed by Jamleck Kamau of Jubilee at 13 per cent.
News
1 month ago

Research shows melanin turns your hair grey or white, which is normally a characteristic of the ageing process.
News
1 month ago

Turmeric may also be helpful for those who suffer from cold and flu symptoms.
Sasa
1 month ago

Scientists surprised after Toads begin climbing trees in the UK

In light of this discovery, scientists say there is a chance the toads might venture up even higher.
Sasa
1 month ago

Make tasty corn dogs at home with this recipe

It originated from the United States and is commonly found in American cuisine.
Sasa
1 month ago

Picture in Picture allows you to watch YouTube videos in a small mini player while browsing other app.
Sasa
1 month ago

Rates of hospitalization and survival are still under investigation, according to the authors.
Sasa
1 month ago

Sugary foods tend to disrupt some of your sleep hormones, leading to less restful sleep.
Sasa
1 month ago

Make tasty scotched eggs at home with this recipe

It is hard-boiled egg wrapped in sausage or minced meat.
Sasa
1 month ago

It follows a visit by a Commonwealth pre-election assessment team in April.
News
1 month ago
WATCH: The latest news from around the World
by BBC NEWS None
Health
18 July 2022 - 11:42