• Stress and low metabolism greatly contribute to accumulating fat in the belly area.

• With age, our upper bodies become bigger due to a drop in oestrogen levels and inceased testosterone levels. 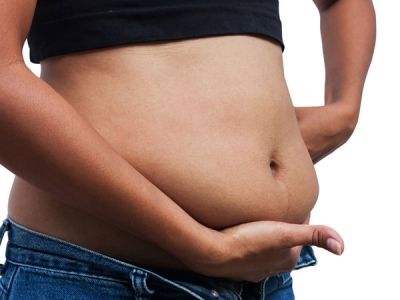 When we talk belly fat, we are referring to that extra weight that sits around the middle area of our bodies.

According to a Nanyuki based nutritionist, Wincate Wangari, this fat is typically made up of two types and can be very stubborn to lose.

“Firstly, we have the subcutaneous fat, which makes about 90 per cent of the fat and it’s the one that you can pinch with your fingers,” Wangari says.

“The inta-abdominal fat makes the remaining 10 per cent, and it lies deep in the abdomen, accumulating in organs like liver, pancreas and intestines, that in most cases may be most problematic,” she added.

All though we may affectionately refer to our extra inches as love handles, sometimes carrying too much abdominal weight does have a dark side.

Visceral fat is the active fat that wraps around the abdominal organs inside your body.

Though it cant be seen or felt, this fat can be present on flat tummies as well.

“The visceral fat in the middle makes toxins that affect the way your body works, among them, cytokines boost your chances of heart disease and make your body less sensitive to insulin which can bring on diabetes and other risky diseases,” she said.

“Belly fat is sometimes sneaky. Tucked inside our bodies, you may not be seriously overweight but that does not mean you don’t have a problem,” she added.

Regardless of our age or life stage, experts are still learning how we accumulate stomach fat, especially visceral fat.

“Researchers believe that our genetic make-up influences how effectively our bodies burn energy, but a poor diet can also contribute to this,” Wangari said.

A diet consisting of highly processed foods, which are fast releasing carbs and low proteins greatly affect our bodies.

Wangari says that stress which lowers the metabolism leads to low-fat burning.

“If your struggling with weight, it may be best you avoid alcohol, or consume it occasionally in small amounts,” she said.

She says that poor physical activities like lack of exercise and disturbed sleep also influences our waist line.

Wangari says that scheduling a 30-minute brisk walk on most days of the week or combining aerobic and strength training can help with stubborn fat.

“Hormones also plays a role because, during the reproductive life, women have less visceral fat than men,” she says.

“The upper bodies, the bust and arms begin to increase in size rather than the hips and thighs,” she says

Although menopause is not the only time hormones play an influential role in fat storage, Wangari says that watching our diet and increasing physical activities can help reduce such factors.