Official says none was returned home as they were identified numerically 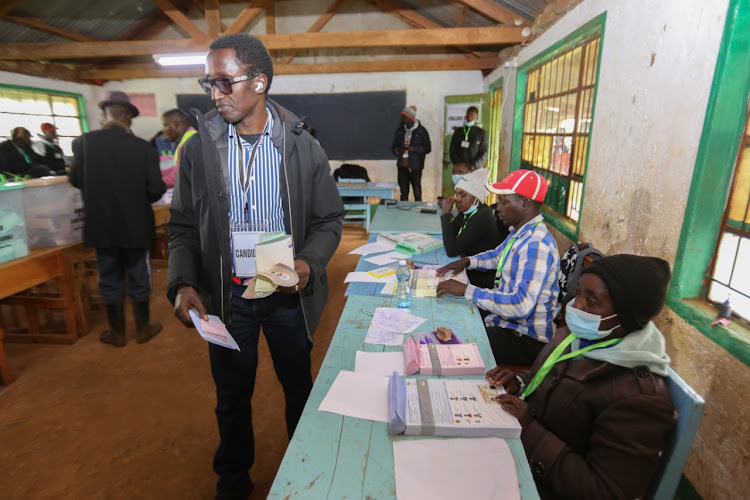 Elderly persons were a challenge during the voting process at the Emukoin Primary School polling centre in Turbo constituency, Uasin Gishu county.

Presiding officer Daniel Sang said the elderly had to be asked to repeat their fingerprint scans a number of times before verification.

"Sometimes we advise them to wash their hands and come back. However, if we don’t find their fingerprints we use the alpha numeric," he said.

The official however said at the time of the interview he had had only four incidences of the elderly missing out but none was returned home because they were identified numerically.

“With the elderly, we key in their identification card numbers, fill form 41 then they vote as long as their names are in the KIEMS Kit," he said.

Sang however said the voting process has been peaceful and turnout has been going on well.

“So far we have not had a major negative incidence apart from handling the elderly's fingerprint verification process,” he said.

Shorth queues were seen at the polling station as the voting exercise continued.

He said the handler is fast and understands his work.

"That has really helped us in moving very fast. In this polling station, people are organised hence contributing to the fast moving queues,” Sang said.

He said they arrived at the polling station at around 3am and were open by 6am.

"When we arrived, we only found the school watchman. There were no people. Voters started trickling in at around 5.30am.

“The turnout is so good and we are operating at 55 per cent. We have not had any disturbance since we opened this polling station,” Sang said.

Damage is not permanent for some labourers as the skin rejuvenates in time, but not voting day.
News
1 month ago

Despite the late start, a returning officer in Kibwezi insisted that stations must close at 5pm.
News
1 month ago