Let all candidates be on the ballot, no zoning — Wamunyinyi

•He asked the region to rally behind his bid saying if he is in the Azimio leadership and Raila Odinga wins the election, the region will benefit more. 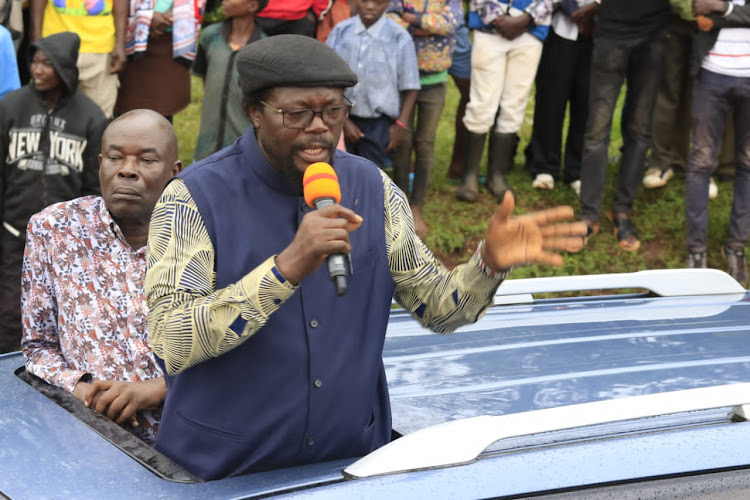 DAP-K party leader Wafula Wamunyinyi has said there is no agreement in Azimio la Umoja that weak candidates should step down for stronger ones to defend their positions.

Speaking on Monday Wamunyinyi said his rivals have been fueling propaganda that he has been engaging in talks with Azimio to ask Kanduyi ODM parliamentary aspirant Alfred Khang’ati to step down and back him.

Wamunyinyi distanced himself from the claims, saying nobody will be barred from going all the way to the ballot but promised to defeat Khang’ati.

“Politics is all about propaganda and tainting opponent’s names. I have no bad intention with those seeking to topple me, nobody in the Azimio umbrella will be asked to shelve his bid,” he said.

Wamunyinyi said he was firmly in the race and prepared to face off with his rivals saying he has done much in Kanduyi and he needs five more years to complete what he had started.

He asked the region to rally behind his bid saying if he is in the Azimio leadership and Raila Odinga wins the election, the region will benefit more.

Khang’ati (ODM) said he won’t shelve his bid saying the recent analysis shows that he is ahead.

He said that there is no weak candidate and no aspirant should be stopped from contesting.

“I have spoken to IEBC officials and they assured me that all those who were cleared will be on the ballot,” Khang’ati said.

In an interview with the Star, Sirisia ODM parliamentary hopeful Moses Nandalwe urged other aspirants in Azimio, especially youths to continue intensifying their campaigns in the country.

Says those criticising him should tell residents what they will do for them.
Counties
2 months ago

The party will produce the Senate speaker, National Assembly majority leader and will also be given three cabinet secretaries slots
News - Page 6
2 months ago