• Health CS Mutahi Kagwe welcomed the donation saying it will enhance the country’s testing capacity especially with the discovery of new variants. 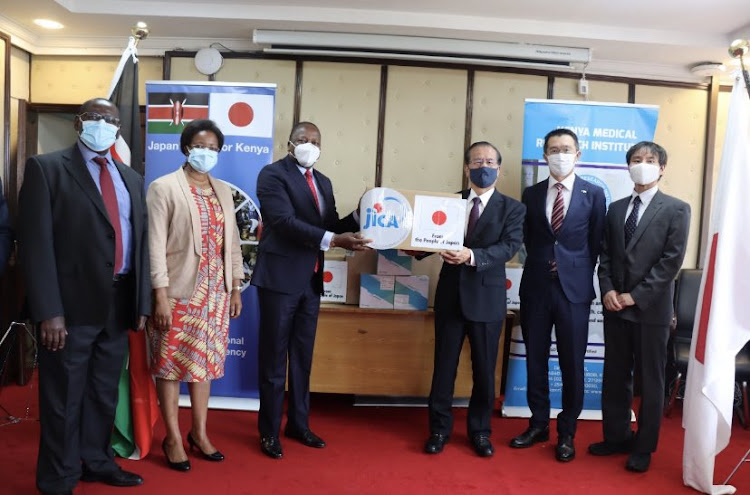 The government’s fight against the coronavirus has received a boost following a donation delivered to Kemri by Japan International Cooperation Agency (JICA).

The agency donated 75,000 PCR kits to Kemri on Thursday, which will boost the laboratory’s capacity for Covid-19 testing.

Amb. Ryoichi expressed his government’s commitment to the fair and equal deployment of Covid-19 doses across the world as witnessed during the COVAX Advanced Market Commitment Summit where Japan pledged to contribute a further $800 million to support the cause.

Kagwe welcomed the donation, saying it will enhance the country’s testing capacity especially with the discovery of new variants.

“The government will commit substantial resources to the medical research body Kemri to make it a premier capacity-building institution in the region,” Kagwe said.

Last month, the Ministry of Health received over 20,000 Covid-19 testing kits at the Kemri headquarters in Nairobi to boost Kenya’s Covid-19 response.

The kits were estimated at Sh44 million.

While receiving the donation, Mochache thanked the Aga Khan University Hospital in Nairobi and the German Government, saying it would go a long way in curbing the pandemic.

During the same month of April, the ministry received a donation of Personal Protective Equipment worth Sh2.3 million donated by MultiChoice Kenya.

The donation included over 10,000 KN95 face masks and at least 2,000 disposable isolation gowns.

There have been Covid spikes in Murang'a, Uasin Gishu, Siaya, and Nyeri.
Coronavirus
1 year ago