President says all Kenyans will enjoy access to high speed and affordable internet.

• President says that Kenya has signed an agreement to allow Google Loon balloons to access the Kenya airspace to enhance 4G network coverage. 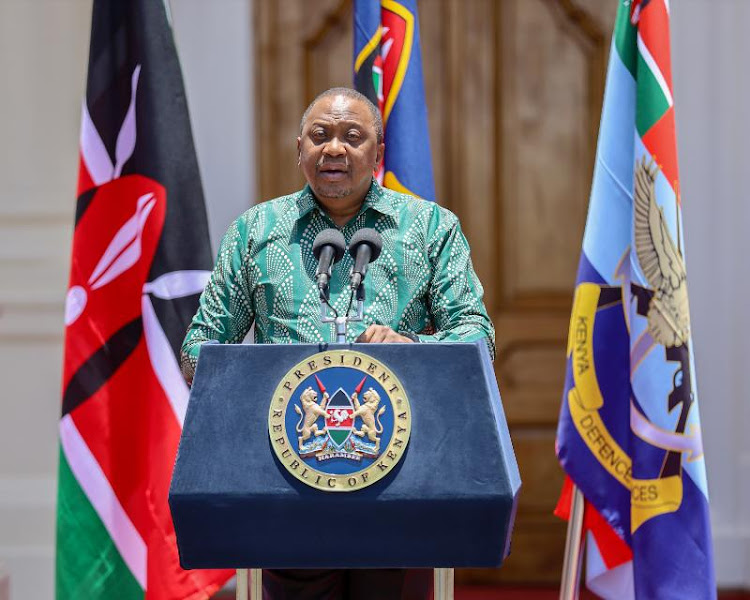 President Uhuru Kenyatta gives his address during a press briefing on the roll out of Google Loon 4G to mitigate Coronavirus Work Disruptions, at State House, Nairobi on Monday, March 23, 2020.
Image: PSCU

President Uhuru Kenyatta has granted approval to ensure universal 4G network is available throughout the country.

Uhuru said that Kenya has signed an agreement to allow Google Loon balloons to access the Kenyan airspace to enhance 4G network coverage.

"This is to enable Kenyans access internet as they work from home during this crisis," he said.

Addressing the nation on Monday, Uhuru said they will have the capacity to cover a wider signal coverage.

"It will allow Kenya to lay foundations for greater expansion ones the virus is contained," he said.

He said that all Kenyans will enjoy access to high speed and affordable internet services.

The gesture by Telkom and Google Loon will go a long way in containing the situation at hand.

"This service will also allow teachers and students to access learning services," he said.

Known as Project Loon, the technology was developed by Alphabet’s X, the company’s innovation lab. It has since become Loon, a subsidiary of Alphabet, which is the parent company of Google.

The technology was used by U.S. telecom operators to provide connectivity to more than 250,000 people in Puerto Rico after a hurricane last year.

The Loon service uses balloons, which are powered by an on-board solar panel, to provide fourth generation (4G) coverage to areas with lower population densities.

They float at 60,000 feet above the sea level, well above air traffic, wildlife, and weather events, Loon said.

With more than 45 million people, Kenya’s major cities and towns are covered by operator networks, but vast swathes of rural Kenya are not covered.

Alphabet to deploy balloon Internet in Kenya with Telkom in 2019

Alphabet Inc’s Loon said on Thursday it would deploy its system of balloons to beam high-speed Internet access with Telkom Kenya from next year to ...
News
4 years ago
Post a comment
WATCH: The latest videos from the Star
by NANCY AGUTU Deputy Digital Editor
Coronavirus
23 March 2020 - 12:45
Read The E-Paper