KAM estimates that 16.7% of its over 800 members are considering downsizing. 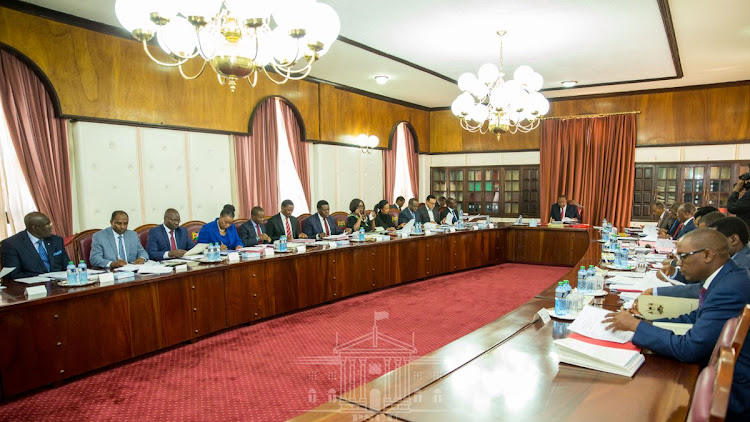 President Uhuru Kenyatta will this morning chair a Cabinet meeting that will discuss a raft of stringent restrictions that his government will put in place to stop the spread of coronavirus.

The Cabinet meets on the day the Ministry of Health is expected to announce a further increase of cases from the seven that CS Mutahi Kagwe announced yesterday.

The government is concerned that some Kenyans are not taking the call to maintain social distance and work from home seriously.

According to a draft government order seen by the Star, the government plans to impose tight emergency restrictions nationwide on people’s movements.

In an echo of the far-reaching measures already imposed in Italy, France, Spain, China, US and other countries, people will be allowed to leave their homes only to buy food and medicine, go to hospitals and banks, or take trips related to the care of the young and the elderly.

Those rules could take effect by this weekend if approved by the Cabinet.

Already schools and universities have been closed. The government also plans to close restaurants, bars and hotels nationwide along with non-essential stores, a step some counties like Mombasa have already taken.

"The Cabinet will consider, banning inter-county travelling because many Kenyans are rushing upcountry where health systems are weaker.

"If that doesn't work, all armed forces will be deployed across the country to force people to stay in their houses unless they are essential service providers," a member of the task force on Covid -19 said.

The government believes the introduction of new measures will be necessary to protect 47 million Kenyans, especially the most fragile individuals.

Massive job cuts loom as firms turn to austerity measures to deal with revenue shortfalls as the country begins to feel the devastating impact of coronavirus.

Hundreds of employees with Export Processing Zone firms have also been sent packing due to lack of raw materials and inability to export.

Also hard hit are hotels, clubs and the tourism sector as the government moves to enforce social distancing that has literally grounded nearly all socio-political and economic activities.

The government and private institutions on Monday sent most of their employees home as part of the social distancing measure to curb the spread of the virus that has since affected over 180,000 people globally and killed more than 7,000 others.

"It's a health crisis that is bound to have a financial and economic impact and not to the positive but rather to the negative," President Kenyatta acknowledged yesterday.

He said there are Kenyans who might be forced to take half pay or be laid off.

In its presentation to the National Treasury on the impact of coronavirus to the sector, the Kenya Association of Manufacturers estimated that 16.7 per cent of its over 800 members are considering downsizing to deal with lower income as a result of supply chain disruption.

The exchequer will on March 23 receive a detailed report on the impact of the virus on various sectors of the economy.

Speaking to the Star by phone, Kenya Federation of Employers (FKE) executive director Jacqueline Mugo said the coronavirus calamity has come to complicate the employment sector, which was already grappling with retrenchments.

''This is a big threat to the country’s job market that is already at its low. The federation has however not recorded any case of retrenchment as a result of the virus,’’ Mugo said.

She explained that most employers are adhering to the presidential directive on social distancing, with some sending staff on compulsory leaves, work in shifts or asking non-essential employees to work from home.

She appealed to the government to come up with incentives to cushion employers from negative effects of the virus as the country’s confirmed tally hit seven.

Yesterday, flower firms in Naivasha were forced to send at least 1,000 employees home after registering huge losses in the past three weeks on a closed European market.

Currently, flights to some EU countries affected by the virus have been suspended while the Dutch auction, which is the main market for the country’s flower exports, has collapsed with exports dropping by 50 per cent.

Kenya Plantation and Agricultural Workers Union Naivasha branch secretary-general Ferdinand Juma described the situation as fluid, with the number likely to rise in the coming days.

“Since Monday around 1,000 workers have been sent on paid leave while those on contract have been sent home for two weeks as their employers monitor the situation,” he said.

Juma said the crisis had raised anxiety among thousands of workers in Naivasha as their jobs were in jeopardy.

“We have over 30,000 workers in various flower farms in Naivasha and currently the situation is worrying as very few flowers are been exported due to the coronavirus crisis,” he said.

Kenya Flower Council chief executive officer Clement Tulezi on his part said that only 50 per cent of the country’s flower production is accessing the EU market.

“The exports are fluctuating from day to day but the average export is 50 per cent with the Dutch auction yesterday operating at 35 per cent,” he said.

He estimated the daily loss at Sh10 million, adding that several farms had suspended the shipping of their flowers following the crisis caused by the coronavirus in several EU countries.

Several hotel installations in Naivasha specialising in Meeting Incentives, Conferencing and Exhibition (MICE) have sent their staff on two months unpaid leave after the government put a stop on meetings.

According to Lake Naivasha Resort proprietor Rahab Mwihaki, the sector is one of the hardest hit with tens of workers staring at job losses.

She said that nearly all their bookings had been cancelled due to the fear caused by the epidemic noting that it would take months to recover.

“The only way that the government can support this sector is through tax waivers on some services as currently, we are facing one of the worst times in our country,” she said.

Crayfish Camp CEO Peter Mehta echoed her sentiments, noting that they had been forced to send over 75 per cent of their workforce home as they joined the government in fighting the virus.

“This is the darkest moment for this sector that employs hundreds directly and indirectly in Naivasha and the government should put in measures to cushion the investors,” he said.

In Nairobi, an employee of a popular Five- Star hotel told the Star that they had been sent on two months unpaid leave as the management monitors the situation.

Hotels and camps within the Tsavo and Amboseli circuit have also suffered massive cancellations.

“We have had over 80 per cent cancellations across the region,” said Willy Mwadilo, KAHC chairman, Tsavo-Amboseli region.

Mwadilo, who is also the general manager Sarova Taita Hills Game Lodge and Salt Lick, however, said his hotel would not be sending any employee packing.

“We are retaining all our staff. The only thing we have is some will be going for leave and those who are off duty will stay at home as we monitor the situation,” Mwadilo said.

Last week, the Ministry of Tourism announced a precautionary facility worth Sh500 million to cushion the hospitality sector from the ravages of the virus.

The sector has presented proposals to the Treasury seeking waivers on visa fees for tourists to bridge the impending arrival deficit.

It also wants a revolving fund established for hotels to borrow from to refurbish establishments, among other measures to cushion the industry.

Last week, Treasury CS Ukur Yatani told the Star that the virus is likely to hurt the country’s economic prospects, forcing some firms to close shop and raise the cost of living.

To minimise the impact of the virus on the economy, the Central Bank of Kenya yesterday announced a raft of monitory policies to cushion households and businesses from the harsh effects of the virus.

Governor Patrick Njoroge said lenders had agreed to extend personal loans by a year to allow borrowers to tackle the coronavirus calamity. He was accompanied by the chairperson of Kenya Bankers Association (KBA) and MD KCB Group Joshua Oigara during a visit to President Kenyatta.

''All commercial bank personal loans that were there on March 2, are eligible for an extension for up to one year. SME and corporate borrowers can approach their banks to be assessed for loan restructuring. The cost will be borne by banks,'' Njoroge said.

Lenders also agreed to restructure loans taken by SMEs to give them extra breathing space due to the likely drop in revenues as a result of slow business activities.

Mobile bank money and card transaction fees have also been waived to limit the spread of the virus through hard currency.

The apex bank will quarantine new currencies for a week before releasing it into the market.

Lot meant to graduate will be in school months after they should have already left.
Opinion
10 months ago

Banks commit to extend loan payment on personal loans by a year at no cost.
News
10 months ago

Fight, not flight, must be the strategy against corona

Flattening the Covid-19 curve will be aided by accurate information
Coronavirus
10 months ago
by VICTOR AMADALA and GEORGE MURAGE
Coronavirus
19 March 2020 - 05:00