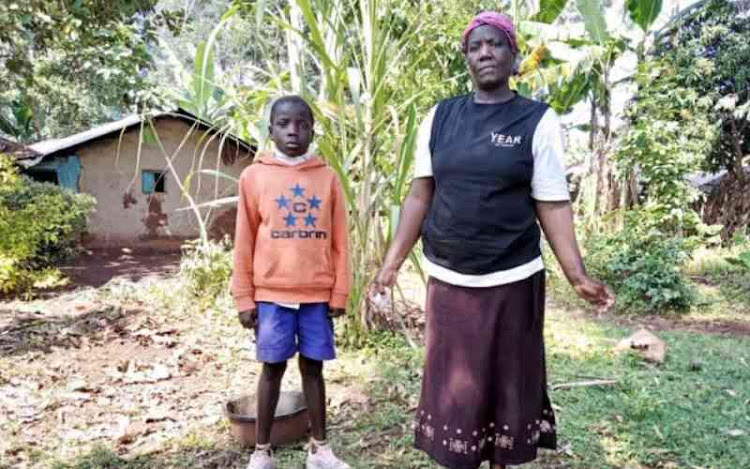 A family in Kakamega is appealing for help to enable their son who was born without an anus to undergo surgery.

Hopekin Shikuku, 12, of Emuhunzulu in Khwisero in Kakamega has not been able to pass urine or faeces normally since he was two days old.

His mother, Christine Shikuku, says she had a normal pregnancy and delivery but only discovered that her son could not pass urine two days after he was born.

“I had known that I was going to have a baby boy and I was excited when I finally delivered a healthy son. But then after two days, I discovered he was not passing urine and seemed to be in discomfort,” she says.

The distraught mother and baby were referred to the Jaramogi Oginga Odinga hospital in Kisumu where the baby was operated on for anorectal malformation.

“The operation was basically to try and create an anus to enable him to pass faeces as he was born without one,” Christine says .

She however says despite the surgery, the problem persisted and the baby still wouldn’t pass urine or faeces.

Christine says from Jaramogi Oginga Odinga hospital, they were referred to the Kenyatta National Hospital in Nairobi where two scans were conducted.

At Kenyatta hospital, doctors also discovered that the first surgery at the Oginga Odinga hospital in Kisumu had led to the injury of the prostrate urethra.

This meant that the boy was unable to pass urine through the penis and was instead doing so through the abdomen.

The boy needs at least Sh750, 000 to undergo surgery to repair his urethra and anus and enable him to live a normal life.

To make matters worse, the boy’s father was at the time involved in a horrific road accident on his way to visit them in hospital and suffered multiple fractures.

“I was in the hospital with the baby and couldn’t reach him on phone one day. I would later learn that he had been hit by a speeding car just close to the hospital. He was also admitted to the same hospital alongside the baby. This cost us a lot as a family as we exhausted all our resources,” said the mother of seven.

She recalled that at the time, the hospital bill ballooned to Sh500,000 forcing the hospital to confine them after they were unable to pay. But they were lucky after the facility waived the sum after six months, enabling them to go home.

The now Grade 4 pupil at Muhunzulu Primary School struggles with life, with the hope that someone will sponsor his surgery to enable him to live normally.

His mother explains that to help him cope with the situation, he has to be dressed in adult diapers daily, which she said are expensive.

Teachers at the school have however been supportive of the family and continued to rally fellow teachers and learners to contribute towards helping Hopekin manage his condition.

“As a school, we are aware of the two surgeries he needs to undergo to correct his urinal tract and anus. Despite his condition, he is very bright and we hope he gets all the help he needs,” head teacher Casper Mumia said.

Post a comment
WATCH: The latest videos from the Star
by CHETI PRAXIDES Correspondent,Coast Region.
Western
25 September 2022 - 22:00
Read The E-Paper