Says the incumbent has been negligent and corrupt in the disbursement of NG-CDF funds to schools, needy students 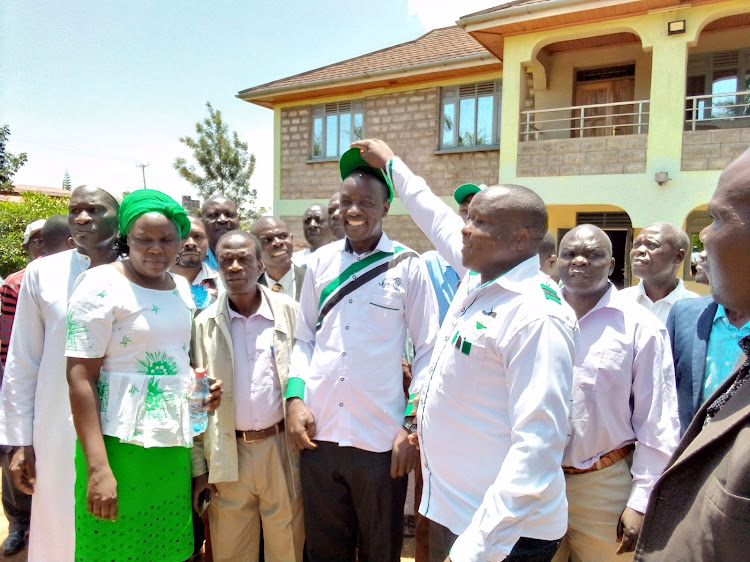 Advocate John Makali when he was received in the party on Friday, 02,2022.
Image: TONY WAFULA

Makali spoke on Friday, saying he decided to join the parliamentary race because the incumbent MP has been negligent and corrupt in the disbursement of NG-CDF funds to schools and needy students.

"The MP in office has served this constituency for many years but Kanduyi voters have nothing to smile about, I want to introduce an era where there is openness during awarding of NG-CDF cheques to schools and needy students," Makali said.

He urged the government to hold discussions and reduce the food prices saying many Kenyans are suffering with the hard economy.

He further asked residents to elect visionary leaders in the August 9 polls.

"Voters please assess the capability of a leader before considering them in elective positions because we want representatives who will take the country to the next level," he  said.

Makali lauded party leader Moses Wetang'ula for allowing him into the party and rallied the residents to support the State House bid of Deputy President William Ruto.

"So far I haven't seen any leader having the agenda to change the economy of Kenya like Ruto, I want to humbly ask western region to support Kenya kwanza," he said.

In his appeal, Makali asked politicians to conduct peaceful campaigns and avoid violence during rallies.

"Let's minimise violence and holding grudges because of different political opinions,  there is life after elections," he said.

Simiyu said that Makali will go into nomination with two others -Wafula Wakoli and Wafula Wambanda.

Lusaka is aiming to re-capture his seat in the August polls on the Ford Kenya ticket.
Counties
8 months ago

He has been popularising DAP-K and is the point man for Azimio la Umoja brigade in Bungoma.
Counties
8 months ago

Simiyu said they cannot decamp from DAP-K at the moment as this could risk their seats.
News
8 months ago