Gazetted officials decline to resign as requested by CS Eugene to pave way for the two politicians to take over. 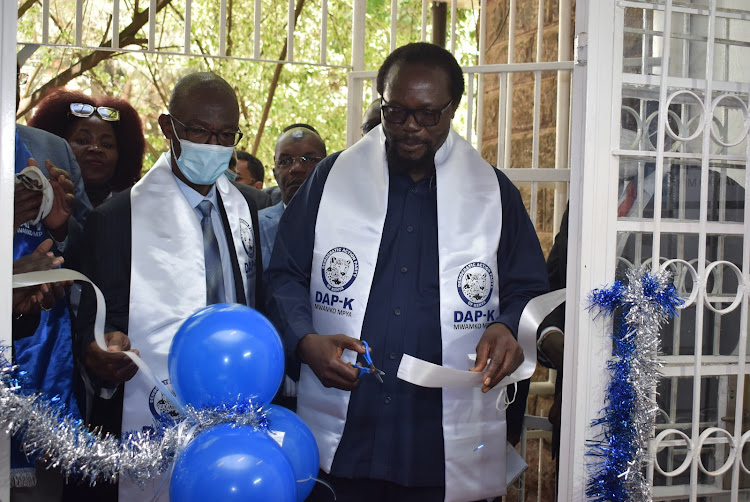 Trouble is brewing  in the Democratic Action Party of Kenya after a gazetted list of officials emerged without Kanduyi MP  Wafula Wamunyinyi and his Tongaren counterpart Eseli Simiyu.

The Registrar of Political Parties last Tuesday issued a Gazette notice with the names of the duo missing. Wamunyinyi is supposed to be the party leader and Eseli secretary general. They got the jobs at the party NDC on December 14 .

The notice did not have the position of party leader but had David Simiyu Muchele as national chairman while Bernard Wanjala Masanja was named secretary general.

The Star has established that the endorsement of Eseli and Wamunyinyi came when the two had not officially joined the party as members.

“Eseli and Wamunyinyi have not been members of DAP-K and I wonder why they have been calling themselves party officials. How can you lead a party you are not a member of?” posed Antony Wafula, a founder member.

He said the endorsement of the two as party officials was just a gimmick and any changes to that effect would force members to seek court redress.

“The party has its constitution, which clearly stipulates how change of party officials should be made. Any changes through the back door should brace for a legal battle of titans,” he said.

Nderitu told the Star her office simply gazetted what had been filed by the party.

She went on: “We work with what has been put before us. We only ascertain whether it is properly signed by the right people, whether the minutes are there and whether everything is in order, then we proceed to gazette.”

If there are objections, she said, then “we forward back to the party explaining the facts of law and tell them to address the matter”.

The Star has further established that the bona fide officials as gazzeted by the Registrar of Political Parties have declined to resign to pave way for the Wamunyinyi group as requested by Eugene .

“We can’t be forced to resign and pave way for people who have no idea how we started the party. We have sacrificed to have this party where it is now ,” said an official who sought anonymity .

Party chairman Muchele however refuted the claims of any resistance, saying they had all agreed to pave way for the new officials and what remained was formalisation and filing of the returns.

“There is nothing like any old officials resisting. It is just that the technicalities that were involved but we intend to file the returns and Eseli and Wamunyinyi will surely be party officials,” he said.

Muchele acknowledged that the two were made officials before they joined the party, saying they couldn’t join the party at that time because it would have meant that they lose their parliamentary seats.

Wamunyinyi said because the window for switching parties had not opened, he and Simiyu were still members of Ford Kenya at the time of endorsement.

“We have just resigned from Ford Kenya to join DAP-K. If we had left that time, there would have been a by-election. This is the right time to change parties. We shall be filing fresh returns,” Wamunyinyi said.

He told DAP-K members there was no cause for alarm, adding that corrections and another filing would be made.

In the gazette notice, the registrar said that “any person with written submissions concerning the intended changes by the political party shall within seven (7) days from the date of this publication make their written submissions to the Registrar of Political Parties".

Post a comment
WATCH: The latest videos from the Star
by JOHN NALIANYA Reporter
Western
27 March 2022 - 22:00
Read The E-Paper