Wambilianga was forced to cut her speech after she was shouted down by the crowd.

• Wambilianga was forced to cut her speech after she was shouted down by the crowd.

• Political analyst Hillary Barasa says that the race Bungoma woman MP race is between Wambilianga and Reginalda Wanyonyi who will be vying on DAP-K ticket. 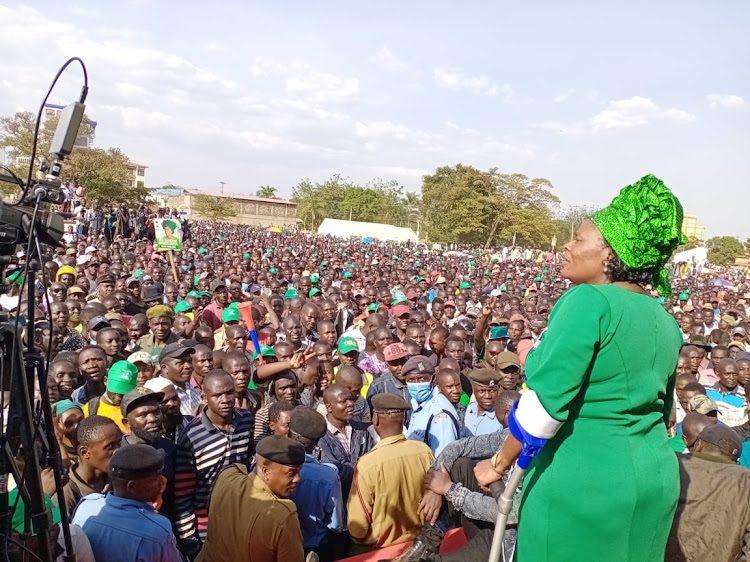 Lusaka launched his governor bid at the rally and was flanked by leaders allied to the Ford Kenya party.

Wambilianga was forced to cut her speech after she was shouted down by irate residents who demanded her to hand over the microphone to the MC.

Attempts by the woman MP to defend her track record fell on deaf ears as residents told her off.

"When I took over the leadership as a woman MP, many school-going girls were facing challenges in terms of early pregnancy, rape and defilement. But immediately came in, I initiated strategies to ensure that they are taken back to school," Wambilianga said amidst the heckling.

Wambiliaga is serving her first term in office. She ousted the pioneer county MP Reginalda Wanyonyi in the 2017 polls after vying on a Ford Kenya ticket.

Political analysts bill the race as between Wambilianga and Wanyonyi who will be vying on the DAP-K party ticket.

He has instead focused on campaigning for Speaker Lusaka to recapture the seat from the incumbent governor Wycliffe Wangamati.

The Speaker made the move on Friday at a rally in Bungoma.
News
8 months ago