VIE AND TRY HIS POPULARITY

Say he should allow residents to elect their leaders without outside forces.

• Eugene has been criss-crossing Bungoma county to market the newly formed DAP-Kenya party.

• He has declared that the party will support ODM leader Raila Odinga for the presidency. 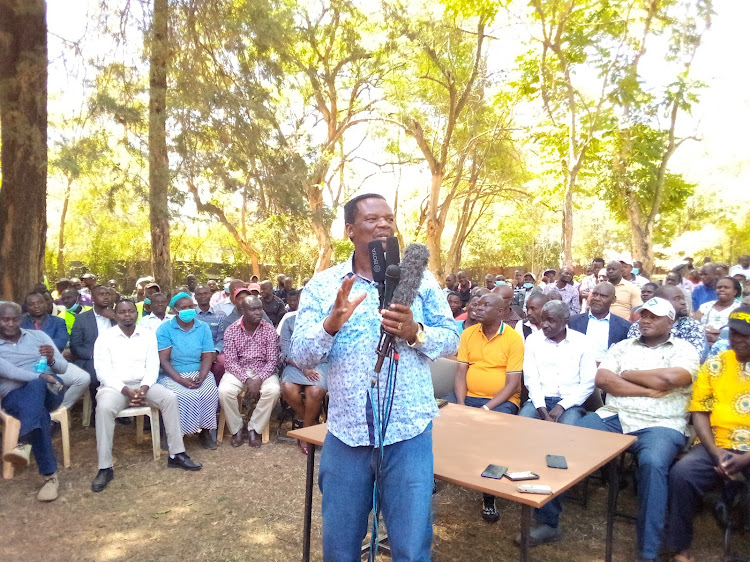 They asked Eugene to allow Bungoma residents to elect their leaders without outside forces.

The MPs spoke when they received Bungoma gubernatorial aspirant Zacharia Baraza to UDA.

"We are telling Eugene to concentrate on his job as Cabinet Secretary or remain in Trans Nzoia and stop interfering with Bungoma politics," Mwambu said.

They said they do not understand why the CS has been telling residents who to elect in the coming elections.

Eugene has been criss-crossing Bungoma county to market the newly formed DAP-Kenya party.

He has declared that the party will support ODM leader Raila Odinga for the presidency.

Wanyama said he will teach Eugene and his new DAP party a lesson. He urged Eugene to vie for an elective seat to gauge whether he is popular or not.

“Why can't he try vying and test his popularity,” the MP said.

They appealed to residents to back Ruto for the top country seat in the August 9 General Election.

They said the Bukusu community will never support Raila as he frustrated Wetang'ula and the late Wamalwa Kijana.

"We are not going back to Raila because of what he did to our two Bukusu brothers," Mwambu said.

Waluke said residents should not listen to lies that will eventually lead them to be in the opposition.

"Stop listening to outsiders who will confuse you more. Vote for Ruto if you want to be in the next government," the MP said.

Baraza asked Bungoma people to elect him as their next governor in the August elections.