Say the decision to slap them with the levy was against the spirit of the East African Community.

• The truckers Covid-19 test is valid for 14 days. They are required to take fresh tests every fortnight.

• On Tuesday, however, they said Uganda had revised the testing to seven days. 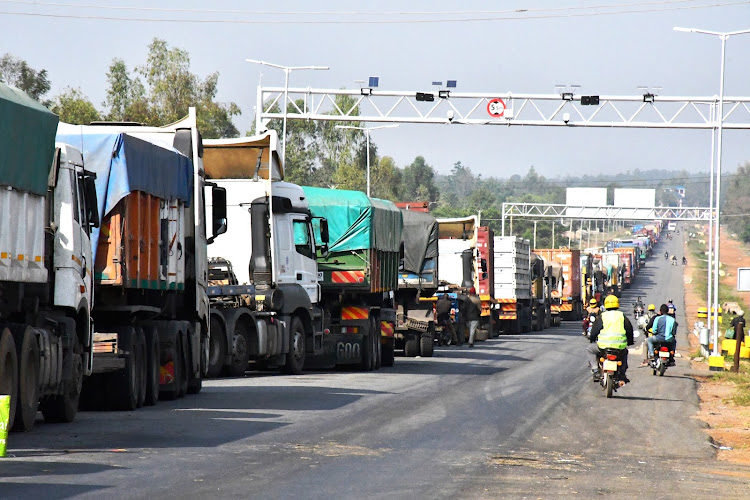 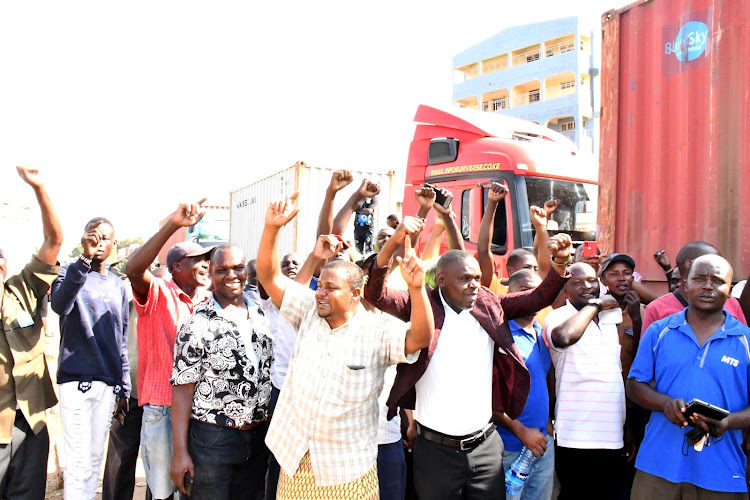 IN PROTEST: A group of truck drivers protest in Malaba town on January 3, 2022.
Image: EMOJONG OSERE 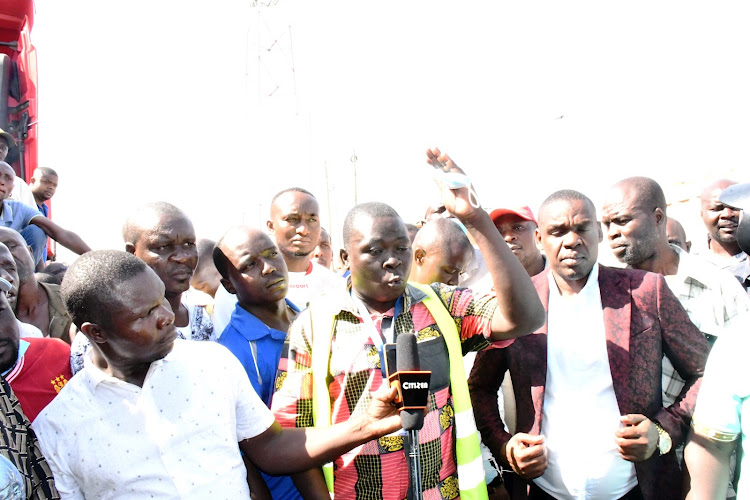 The truckers said they would not resume work until the Sh3,600 Covid-19 testing fee introduced by Uganda is scrapped.

Truckers plying the Northern Corridor went on strike on Monday afternoon to protest a decision by the Ugandan government to introduce a Covid-19 testing fee for cargo drivers entering the landlocked country.

Truckers told the press in Malaba town on Tuesday that the decision to slap them with the levy was against the spirit of the East African Community.

They said the Kenyan government should intervene to solve the impasse, which they said is threatening trade between Kenya and her neighbours.

They said truckers are subjected to mandatory Covid-19 testing on the Ugandan side of the border irrespective of whether the drivers have valid Covid-19 certificates or not.

Those with valid certificates, the cargo transporters said, have to undergo another test in Uganda before being allowed to proceed with the journey to their respective destinations.

“We test for Covid-19 while in Kenya but when we cross with the results into Uganda we are told the results are invalid. We have decided to suspend our operations into Uganda because of the discrimination that is going on in that country,” Mutisya said.

“We want to know why truck drivers, despite having valid Covid-19 certificates must undergo another Covid-19 testing which comes at a fee of Sh3,600.”

The truckers are also protesting a decision by the Ugandan government to subject them to Covid-19 testing every seven days. This, they said, is a ploy by the East African country to exploit cargo transporters.

The strike came seven months after truckers protested against another fee that had been introduced by the Ugandan government to facilitate testing for Covid-19.

In May last year, transporters said they would not pay the testing fee for long-distance truck drivers. They disrupted operations between Kenya and Uganda.

Transport Cabinet Secretary James Macharia had then ordered all cross-border truck drivers to be tested for Covid-19 at least 48 hours before leaving Mombasa or Nairobi.

The truckers Covid-19 test is valid for 14 days. They are required to take fresh tests every fortnight.

On Tuesday, however, they said Uganda had revised the testing to seven days.

“Testing in Uganda is done after every seven days instead of 14 days. Why?” Mutisya posed.

“As truck drivers we will not tolerate this state of affairs. That is why we have decided to go on strike. No truck driver will go to Uganda until this mistreatment stops.”

Trucker Ibrahim Ahmed said they do not understand why the government is not helping them.

"The government should intervene and help us get out of this mess. We have been mistreated for a long time on this route,” he said.

“Before we went on strike, we presented our complaints to Ugandan Port Health officials and they told us they do not have the power to suspend Covid-19 testing fees.”

“We have gone on strike and if they want to come and take their containers from Malaba, Kenya, let them come. For us, we have suspended our operations in Uganda.”

“Drivers travelling to South Sudan, Rwanda, Burundi and DR Congo must test before returning to Kenya because some of them spend more than seven days before coming back to Kenya."

"That means that for every trip across Uganda, they must pay Sh7,200 for testing, yet again they do not receive test results. They must test in Kenya for them to receive certificates which Uganda claims are fake.”

“This is robbery without violence because you cannot take money from somebody in the name of testing and you do not issue any certificate showing that the driver has been tested. Imagine they are telling us that the Covid-19 certificates we get from the Kenyan government are fake.”

“They don’t want us to travel with Kenyan Covid-19 certificates. They want theirs. But again after paying and testing, you do not receive the certificate. They tell you to go on with the journey. We want the Kenyan Ministry of Health to intervene and save us from this mistreatment.”

The truckers said the strike will not interfere with normal border operations.

Omondi said other vehicles will continue leaving and entering Kenya, but no truck will be allowed to cross into Uganda.

“Truck drivers will not cross the border. The border will remain open for other travellers. We have informed Kenyan security officers and they have allowed us to continue with the strike provided we do not block the border,” Ahmed said.

“We have joined truck drivers in this strike until we get justice. The spirit of the East African Community is to work together,” he said.

“But what we are seeing in Uganda is disheartening because we are wondering why our people are being subjected to mandatory testing even if they have valid coronavirus certificates from Kenya.”

Attempts to get comment over the truckers' claims from Ugandan authorities were unsuccessful as journalists were not allowed to cross into Uganda.

The strike now threatens to hurt exports and imports between the two countries and Uganda's exports to international markets.

Uganda accounts for 83.2 per cent of transit cargo through the port of Mombasa.

South Sudan takes up to 9.9 per cent while DR Congo, Tanzania and Rwanda account for 7.2 per cent, 3.2 per cent and 2.4 per cent respectively.

Say their documents showing they were tested in Kenya are declined.
Counties
7 months ago
by EMOJONG OSERE Correspondent, Busia
Western
04 January 2022 - 22:00