MP Eseli dismisses claims he has moved to ODM

He says the allegations are founded on rumours by Ford Kenya leader Wetang'ula's team. 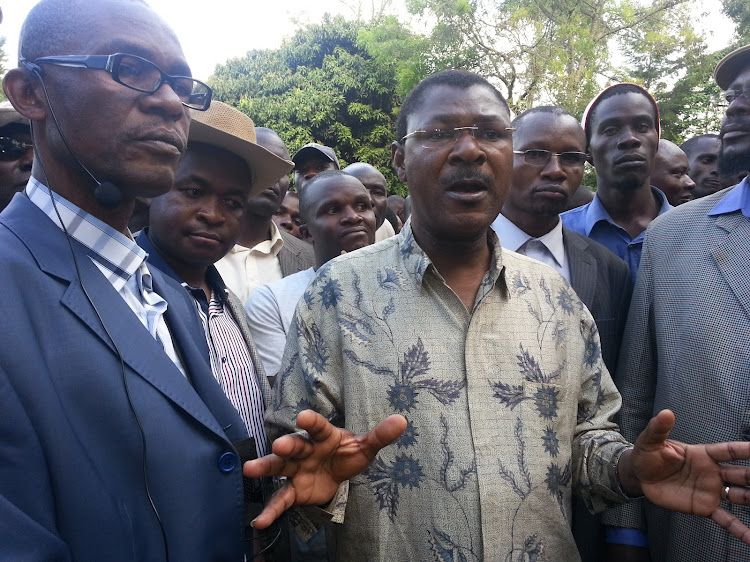 Tongaren MP Eseli Simiyu has dismissed claims that he has ditched Ford Kenya for ODM after protracted party wrangles.

Speaking to the Star, Eseli dismissed rumours doing rounds on social media that he had thrown in the towel and joined ODM.

"I have just arrived from the UK. Those are rumours fuelled by Weta's [Wetang'ula] team desperately trying to hold onto FK [Ford Kenya]," Eseli said.

Eseli said the battle to control Ford Kenya was still on, saying the party will soon be returned to the legitimate owners.

"We will not rest until we ensure we return the party to the real owners, not people who were in Kanu fighting the formation of our party," he said.

Earlier this month, Wetang'ula's faction held a National Delegates Conference at the Bomas of Kenya, Nairobi, and elected new officials, ejecting all those who had earlier taken over the party.

But Eseli said Wetang'ula had gone against an order by the Political Parties Tribunal that had stopped the NDC.

The tribunal had stopped two parallel NDCs, one called by a faction led by Wetang'ula, and the other by Eseli's wing.

He said the purported order the Wetang'ula group used to hold the NDC only allowed a virtual meeting, not elections.

The Eseli team has written to the Registrar of Political Parties not to accept returns of elections from the Wetang'ula faction.

“We don’t expect the Registrar of Political Parties to accept returns in a process that has been stopped by the court," he said.

Eseli, Kanduyi MP Wafula Wamunyinyi and Bungoma Governor Wycliffe Wangamati have been engaged in a protracted battle with Wetang'ula over party leadership after they attempted to remove him.

Some of those who were on Eseli's side have since ditched Ford Kenya and joined UDA, while others have been sending mixed signals.

Those who have since moved include Bungoma Deputy Governor Ngome Kibanani who has declared will run on a UDA ticket.

MPs allied to Deputy President William Ruto within Bungoma county have, on the other hand, been wooing Wangamati to also join UDA.

Eseli has however said working with Ruto was not among his options.